‘The Fonz’ Headlines Corporate Retreat on How to Lock Out Unions

The NFL referee lockout, resolved yesterday after a slew of bad press for the league, has highlighted the difficulties that lockouts pose for companies. When calling in scabs so as to put the screws to employees in contract fights, employers can’t always maintain the quality of their product. (Look no further than Monday night’s officiating at the Seahawks-Packers game.)

One of these work-stoppage consultant groups, IMAC Services (which merged with AFI International as of August to become AFIMAC), held a conference on May 10-11 entitled ​“Navigating Your Labor & Union Landscape” at the luxury Hyatt Regency Scottsdale Resort and Spa at Gainey Ranch in Arizona. Conference workshops and speakers advised employers how to take the necessary steps to prepare for problems with their unions.

The headliner was none other than actor Henry Winkler, a.k.a. ​“the Fonz.”

Winkler has been active in the Screen Actors Guild, and once memorably called out Republican Congress members for ​“say[ing] no about everything” in a controversial Headline News show. But on this day, the actor was slated to give an inspirational keynote speech to companies preparing for struggles with unionized workers. The conference invite [PDF], obtained by Working In These Times, explained, ​“Henry Winkler knows a thing or two about overcoming adversity and of course Hollywood, having spent nearly three decades enjoying success in the business.”

In addition to the keynote from Fonzie, the conference promo billed speeches from a host of labor-relations experts. Among them was John J. Toner, a 20-year veteran of the National Labor Relations Board who has

​“Crisis communication strategies and plans … along with labor disputes and work stoppage topics like pre-strike determination, pre-strike coordination, and communications, and HR and security plan determinations, and actions, evidence gathering and documentation, guidelines for crossing picket lines, supplemental labor plans, and the new NLRB and the globalization of unions”.

If this wasn’t enough to sell the event, the brochure also touts a ​“spouse and guest program” with ​“private shuttle service to popular shopping in Scottsdale” and ​“a private session to learn about the history, art and culture of Native Americans.” In addition, of course, to the spa, golf course, tennis courts and massive swimming pool.

The conference also boasted experts in the ​“business continuity services industry,” who could talk about hiring ​“scab” replacement workers and security personnel with expertise in barring union workers from disrupting operations during a lockout or strike.

So what is that industry, anyway? ​“IMAC is a full service crisis response company that provides services to include security personnel, catering and logistical support, and supplemental labor to Fortune 500 companies across the country,” explains IMAC executive Joseph Schollaert in a promotional video. ​“What makes IMAC different is the fact that we offer a single source solution for companies and provide a single point of accountability for any crisis-related service that may be offered.”

In other words, IMAC is a one-stop lockout shop shop, with a catering staff, trailers on-hand for replacement workers to sleep in during labor struggles, facilities for scabs to wash their clothes and to shower, and vehicles standing ready to transport them across rowdy picket lines (the video rolls footage of angry union workers climbing school buses containing children).

​“I’ve worked with IMAC for over 15 years. I have probably been involved with them in 40 plus sets of bargaining and a dozen or so strikes,“ says management-side labor lawyer Ron Linville in a video testimonial. ​“They have always delivered and I have total confidence in their ability to help me get the best deal for my clients. When I bargain a labor contract, we can only get the best deal for the client if the union knows that we’re dead serious about our position and willing to take a strike. And with IMAC over the years, being well prepared has allowed me to get the best deal for my clients every time.”

IMAC also brags of expert security personnel who can conduct video surveillance of union members on the picket line in order to get injunctions limiting the number of picketers.

​“IMAC always get the evidence that I need to be able to get an injunction, limit the number of pickets and give us a tactical advantage in winning the strike,” explains Linville. ​“I’ve had some strikes where the client had a different security company or their own contact and what happens is I spend 75 percent of my time trying to gather and collect the evidence and put in a format that we can use in court. With IMAC, it’s a package when I go to court, ready to present to the judge.”

Such services have become commonplace in U.S. labor relations at the same time that lockouts have since 2010. With swanky conferences and ​‘the Fonz’ nodding approval, employers may increasingly feel they have the confidence and logistic support to engage in a lockout or risk a strike without losing profits.

Hiring a firm like AFIMAC may sometimes have the effect of entrenching a business in its labor dispute. Firms like AFIMAC often require pay in advance, so they can be on standby in case the union won’t bend to a company’s demands. Companies may feel that if they’ve already paid for scabs, they might as well use them. United Steelworkers Local 7-669 President Stephen Lech tells Working In These Times he believes this to be a big reason his union workers were locked out by Honeywell: Because the union kept mum about whether they would strike after the contract expired, the company decided to lock out workers instead of having to risk paying them and the contingency workforce .

AFIMAC did not respond to request for comment for this story, and actor Henry Winkler’s agent did not respond for comment at publication date. However, one union member and former Fonz fan did have some choice words for Winkler about his appearance at the IMAC conference.

​“Whether Mr. Winkler was aware of the real IMAC agenda or not, he still has a responsibility to disentangle himself from the IMAC conference,” says United Electrical Workers Union (UE) political action director Chris Townsend. ​“He blessed this disgraceful union-smashing company and conference with his star power and good cheer. I suggest that Mr. Winkler contribute his entire IMAC/​Scottsdale appearance fee to [a union]. Mr. Winkler might also help expose the real agenda of IMAC, which is setting up and locking out workers and destroying their lives, families and communities.”

UPDATE: In late-night (screencap below), Winkler appeared to dispute this story. The next day, Winkler’s agent, Carol Bruckner of the Greater Talent Network, confirmed over the phone with WITT that Winkler spoke at the event. She explained, ​“He was brought in by the group not to speak about anything to do with unions or negotiations. He was brought into to be an inspirational speaker about overcoming adversity. He belongs to three unions and is a lifelong supporter of unions.” 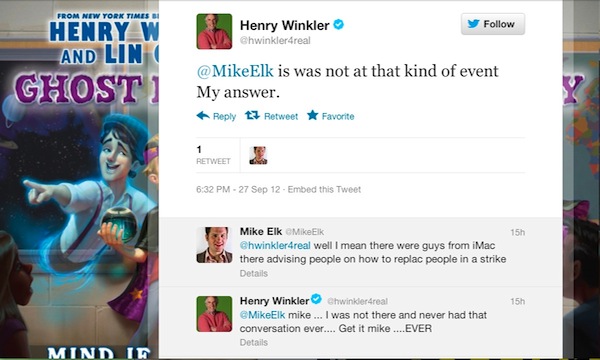 Mike Elk wrote for In These Times and its labor blog, Working In These Times, from 2010 to 2014. He is currently a labor reporter at Politico.
Have thoughts or reactions to this or any other piece that you'd like to share? Send us a note with the Letter to the Editor form.
More articles by Mike Elk
Labor
Steve Early on Labor Reporting: ‘Unions Can Be Thin-Skinned About Criticism’
Labor
Verizon Wireless Workers Make History in Brooklyn
Labor
Emails Show Sen. Corker’s Chief of Staff Coordinated with Network of Anti-UAW Union Busters
Similar articles
Labor
In 3,800-Worker Strike, the Ghost of Tony Mazzocchi Still Haunts Big Oil
Steve Early
Labor
Whole Foods Worker Fired for ‘Stealing’ a Sweater—Though It Never Left the Store
Trish Kahle
Labor
1.2M Jobless Face Unemployment Extension Deadline—and Regressive Tax on Benefits
Roger Bybee
Join our newsletter
Fearless journalism, emailed straight to you.
Subscribe and Save 66%