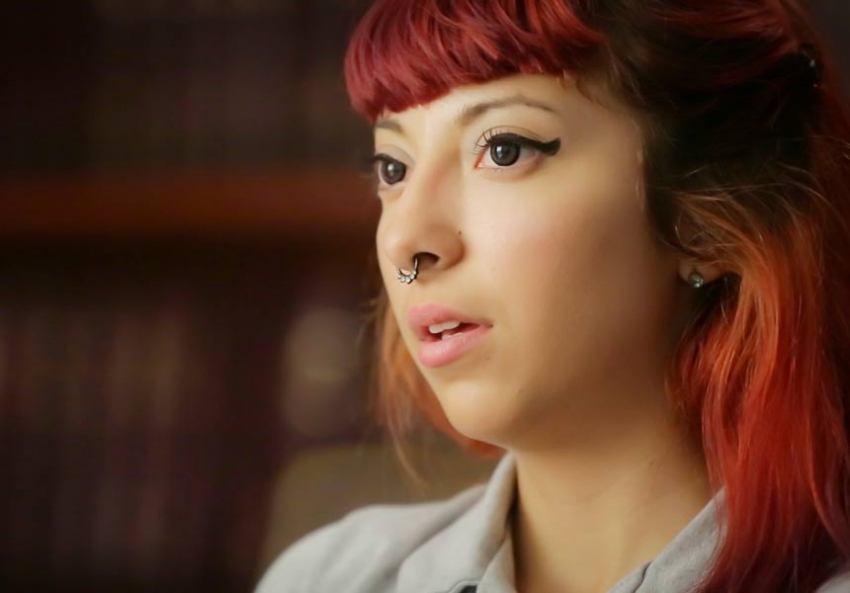 Kimberly Cervantes, 18, is one of seven students and teachers suing Compton's Unified School District over the treatment of traumatized students. (Courtesy of Public Counsel)

Why Compton Students Are Suing Their Schools

Nine in 10 6th grade students in the area have witnessed or experienced a violent crime. Is trauma counseling part of their right to an equal education?

When most people think of trauma, they imagine an immediate event: a soldier who has fought in a war zone or a victim of sexual violence, for instance. But experts on childhood development and education say that 'complex trauma'—repeated exposure to violence or stress—may be even more widespread and pernicious.

There’s the time she and her brother were walking home from school and nearly collided with a group of armed men mid-shootout with an opposing gang. And the time two of her classmates were gunned down just outside the school gate. And the time she was sexually harassed and physically attacked while riding the bus. After she started missing classes because she was too anxious to show up, she was ultimately placed in an alternative school for students the district is otherwise either unwilling or unable to teach.

None of these experiences, of course, were particularly conducive to Cervantes’ learning. “It’s hard to concentrate on class when you’re thinking about how someone you knew just died,” she says.

Cervantes’ experiences are far from unique. A recent study by the RAND Corporation suggests that as many as nine out of 10 middle schoolers in the area have witnessed at least one violent crime. “I know so many students who experience anxiety attacks because of what they’ve seen, and it’s just really hard for them to get an education,” Cervantes says.

That’s why Cervantes and seven other students and teachers are suing Compton Unified School District (CUSD) in a case that could transform how schools respond to trauma and violence. They argue that CUSD’s failure to provide adequate training and resources for coping with trauma is denying students equal access to education. Instead of supporting its traumatized students, they say, Compton is setting them up for failure with a “punish first, ask questions later” approach to discipline. All but one of the students in the case have been suspended or expelled from school on multiple occasions, and only one student ever received CUSD mental health services.

When most people think of trauma, they imagine an immediate event: a soldier who has fought in a war zone or a victim of sexual violence, for instance. But experts on childhood development and education say that “complex trauma”—repeated exposure to violence or stress—may be even more widespread and pernicious. Complex trauma during childhood brain development can cause stress responses to become permanently impaired, so that even the smallest trigger can send a person into “fight or flight” mode, severely limiting the ability to focus or engage in everyday activities.

Robert Hull, a school psychologist in Prince George’s County, Md., has researched the impact of complex trauma on childhood development for decades. “Trauma has an impact on the brain, even if you never get physically attacked,” he says. “Abuse, neglect, a parent misbehaving, all of those things impact the brain. And when you look at these kids’ brains, it looks like they’ve been hit over the head with a brick.”

“There are kids in every school—in virtually every classroom—who are struggling with these challenges,” Hull says. “You can’t address the achievement gap without addressing trauma first.”

Only a few schools and school districts have stepped up to meet this challenge, but their experiences offer hope for the plaintiffs in Compton. Brockton Public Schools, a largely working-class school district south of Boston, began implementing “trauma-sensitive” reforms more than five years ago in partnership with the Trauma and Learning Policy Initiative (TLPI), a collaboration between Massachusetts Advocates for Children and Harvard Law School. This meant training staff on how complex trauma affects learning and behavior, as wel las modifying disciplinary practices to focus on deescalation instead of punishment.

Sal Terrasi, director of pupil personnel services, described one example of trauma-sensitive discipline in action: After a first-grader pulled the school fire alarm as a prank, instead of receiving a suspension, he was taken to a “reflection room” with a school counselor. Eventually, the first-grader gave a presentation to the school’s kindergarteners on fire safety.

And if police visit a student’s home because of domestic violence or other potentially traumatic experiences, school officials are notified, allowing them to respond proactively in school the next day. “Office referrals decrease, suspensions decrease, attendance increases, and students feel more of a sense of belonging.” Terrasi says. “In one building, office referrals decreased by 78 percent in the first year alone.”

The plaintiffs in the Compton case think this access to resources for trauma should be a legal right. Annie Hudson-Price, an attorney for the plaintiffs, says the current system leads to students being punished rather than supported.

“There’s an overwhelming body of evidence that shows that a lot of the behaviors that are treated as worthy of suspension or expulsion are actually resulting from students manifesting their trauma,” she says. “When students are suspended or kicked out of school, they’re being denied education. One of our plaintiffs has been kicked out of every school in Compton—they’re just being cycled through without getting the help they need.”

The plaintiffs are seeking to compel Compton to implement the same formula that helped schools like Brockton become leaders in trauma-informed education: trauma and de-escalation training for all school-site staff, restorative justice-based disciplinary practices, and increased collaboration between school officials, law enforcement and mental-health professionals. If they win, the reforms could become the norm in districts with large populations of students experiencing trauma.

“If this precedent is set, hopefully that will lead school districts around the country to start taking trauma more seriously and recognizing its impact,” Hudson-Price says. “This goes beyond students getting their education; it impacts the long-term health of these communities.”

For Cervantes, though, the impact of this case hits closer to home. “My brothers are still in school,” she says. “I don’t want them to suffer or be disadvantaged because they don’t have access to adequate resources. They go through enough already.”