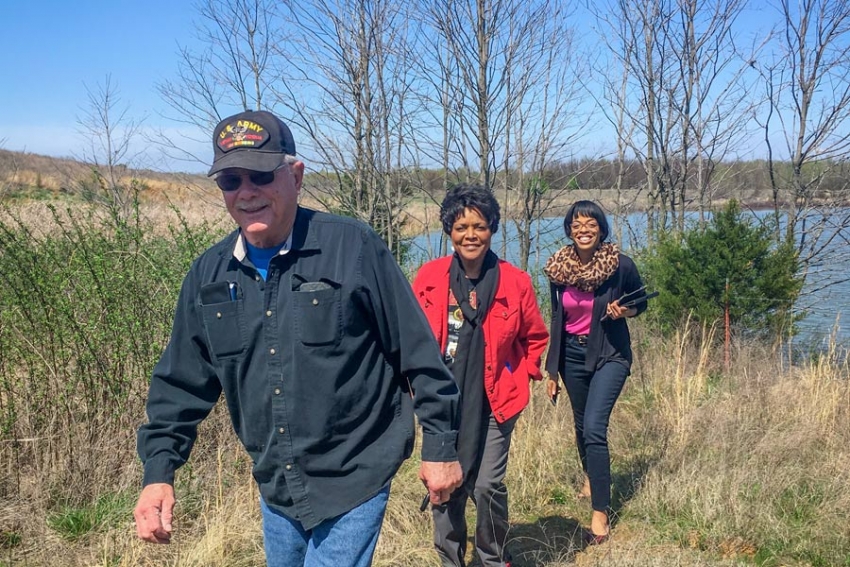 Now residents are fighting back.

BY Valerie Vande Panne
Share TweetReddit39 EmailPrint
BOKOSHE, OKLA.—On the edge of Bokoshe, population less than 500, sits a hill about 60 feet high, covered partly with soil. From a distance, it could be a natural part of eastern Oklahoma’s rolling hills. But this mound isn’t like the others: It’s made of toxic fly ash, a coal byproduct from electricity production, generated by power company AES. The fly ash fills in an unlined, abandoned strip mine at a site also used to dump wastewater from fracking. When it rains, the waste runs into nearby lakes and tributaries of the Arkansas River.
According to Physicians for Social Responsibility, fly ash contains a range of heavy metals, from arsenic to lead to mercury, some of which are linked to cancer.
Residents of Bokoshe have been trying to stop the pollution for years, only to meet with denial at the corporate and state levels. No one in power, it seems, will admit it’s a problem.
That hasn’t stopped Tim Tanksley, 73, a Vietnam vet born and raised in Bokoshe. He and his neighbors call their representatives, file complaints with the Oklahoma Department of Environmental Quality (ODEQ) and have appeared on state PBS affiliate OETA.
On March 30, he shares a video he’s made with Connie Johnson, a former state senator and Our Revolution-endorsed candidate for governor, showing how, on a windy day, fly ash coats the grass that cattle eat like a blanket of fresh snow.
Also meeting Tanksley and Johnson are half a dozen other Oklahomans, some of whom have driven hundreds of miles to share their own towns’ struggles with pollution. Tanksley drives our group out to the pit entrance, passing two empty fly-ash trucks leaving the site. He points out houses as we pass. “That lady has a lymphoma,” he says, then points to the next house and lists more cancers. When we get to the fly ash hill, he shows how the runoff goes into a lake where cattle drink.
The ranchers sell the cattle at market anyway: “When we go to the sale barn, we don’t say, ‘Hey people, these cows have been eating grass covered in fly ash,’” says Tanksley. “We’re not gonna kill ourselves.”
AES has been operating the coal-powered Shady Point Generation Plant near Bokoshe since 1992, but it farms out the removal of the fly ash coal waste to “Making Money Having Fun LLC,” a commercial disposal company. The Oklahoma health department says the rate of cancer in Bokoshe is no higher than anywhere else in the state. To residents who have seen their friends and neighbors die, that is hard to accept.
“[The state] structured their research so they didn’t find anything,” Bob Sands, a veteran journalist now at OETA, tells In These Times. He explains that the state only looked at cancers linked to arsenic and chromium-6, not at those linked to other heavy metals found in fly ash.
While the ODEQ suggests that Bokoshe residents should report problems to it, Sarah Penn, deputy general counsel at the ODEQ, told OETA, “If it’s not within our jurisdiction… we can’t do anything.” The problem, says Sands, is that the state’s original deal to bring AES to Oklahoma placed it under the control of the Department of Mines, not ODEQ.
“A lot of the environmental problems we have [were] swept under the rug because of Scott Pruitt,” says Dana Bowling, 52, a resident of Longtown who came to meet Johnson and see the hill of fly ash. Before he was tapped for EPA chief, Pruitt, as Oklahoma’s attorney general, led an anti-regulation crusade that included eliminating his office’s Environmental Unit. The state has also given coal companies so many tax credits that it provides more state revenue to the industry than it collects, costing the state more than $60 million between 2010 and 2017.
Johnson blames “a system that is heavily influenced by well-connected special interests.” She adds that, as governor, she would work to remediate environmental disasters in Bokoshe and elsewhere.
At the end of the tour, Tanksley takes Johnson and the others to a local cemetery. A number of the graves are fresh. Tanksley points to them one by one and tells life stories that end in cancer.