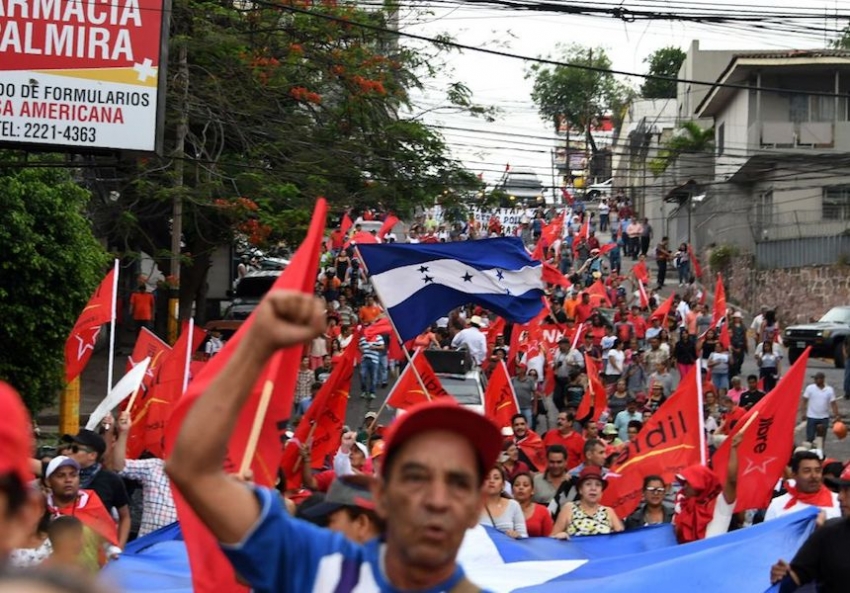 Hondurans protest May 12 in front of the U.S. embassy in Tegucigalpa, in response to the Trump administration's revocation of Temporary Protected Status for Honduran immigrants. (Orlando Sierra/AFP/Getty Images)

By revoking Temporary Protected Status (TPS), the Trump administration is sending Honduran immigrants back to a nation in crisis.

All evidence suggests that the country is still dangerous—and it’s partly the United States’ fault.

The Trump administration has acted to terminate Temporary Protected Status (TPS) for more than 300,000 people from six countries. This means that survivors of natural disaster or humanitarian crises are seeing their lives crumble once again as they become unauthorized residents of the United States.

In early May, Trump canceled TPS for Honduran survivors of Hurricane Mitch, who found refuge in the U.S. some 20 years ago. This means they will soon be forced to return to their home countries.

The Department of Homeland Security is meant to consider the safety of the country that it is sending people back to. According to the Trump administration, Honduras has recovered, so there is no reason to allow the Hondurans to live in the U.S. any longer.

But all evidence suggests that the country is still dangerous—and it’s partly the United States’ fault.

The mainstream narrative goes that Hondurans come to the U.S. because their own country is wrecked with gang violence and poverty, but such a narrative obfuscates the United States’ role in perpetuating that condition.

Beginning in the 1890s, banana-republic imperialism fashioned the country’s subservient economic position. The 1970s saw the beginning of the war on drugs, and a drug lord deported from the United States helped finance a right-wing coup. The Obama administration played a vital role in establishing the success of the military coup in 2009, which insured Juan Orlando Hernández the presidency. Under Hernández, Honduran society is highly militarized. U.S. military aid to the country funds the government’s political repression and violence, which has led to human rights violations. Today, Honduras is one of the most dangerous countries for LGBTQ people and political and environmental activists, and is rife with femicides.

Below is a statistical snapshot of the Honduras that TPS recipients are being forced to return to.

Honduras by the Numbers