Thoughout the day, Bernie Sanders’ revolution-minded progressives clashed with Hillary Clinton’s be-careful-with-the-applecart followers over everything from the Trans-Pacific Partnership, minimum wage, single-payer health care, marijuana decriminalization and the environment. Considering the level of discourse taking place simultaneously in Baton Rouge, ​“clashed” might be too strong a word. But before party compromises were agreed upon, there were some tears, boos and walk-outs.

When it came to fracking, the exchange was raucous. Like Sanders, who made a ban on hydraulic fracturing a central part of his environmental policy, many of his supporters believe that the recent natural gas boom isn’t worth the flammable drinking water, earthquakes and climate change that come with it. Hillary Clinton, whose postions on fracking are more ​“nuanced”, appears nowhere near as comfortable saying adios to a lucrative swath of the early 21st century energy industry.

At the Platform Committee meeting, the task of conveying the high stakes of fracking went to Josh Fox — the Oscar-nominated filmmaker of Gasland and noted fractivist. Fox knew that Democrats wouldn’t adopt his fracking ban amendment, but he gave this speech to the committee anyway: 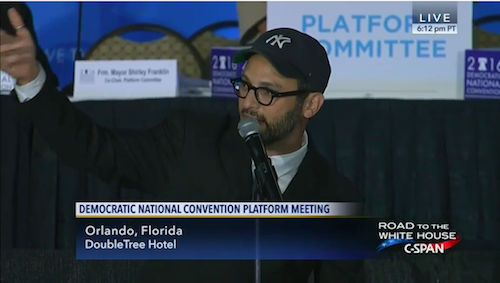 When the frack gas industry first came to my house, and they asked me to lease my land for fracking — something that nobody in 2008 had ever really heard about and there was no science on it — they came to me and said, ​“No it’s just a fire hydrant in the middle of your field, it’s going to be fine. No problems. No worries.” But I heard that that project was started by Dick Cheney, so I had a few suspicions. So I went around the country and reported on it. I made two films—Gasland and Gasland Part 2—one of them was nominated for an Oscar. They went all over the country reporting on the problems of fracking — water contamination, air pollution, a public health crisis everywhere the industry goes, land scarring, the contamination of our government through the buying of our public officials on every level — state, federal and local. This is an abomination and a horror. And at that moment I’d never felt more alone in my entire life.

Or in Arkansas, where they had a thousand earthquakes in one month, in one town. In Guy Arkansas, a woman named Susan Frye attached a plumb bob to her coffee table and every time a microquake came along, she would look at the earthquake website and say ​“there was another one.” And then a 4.7 came along and knocked her husband out of his La-Z-Boy chair. And I imagine, as he hit the ground, something happened to him.

And now a new horror visited on the American people — frack gas power plants being proposed all across this nation, 300 of them. And we know that frack gas is the worst fuel that we can develop for climate change. The single worst. Worse even than our previous worst fuel: coal. Coal is an awful, awful fuel but the natural gas industry came, and they lied, and they said, ​“We’re better.” But we know now that because of all the methane leakage, and the CO2, that the total emissions profile of frack gas is worse. It’s worse. It will heat the planet faster and it will bring us past our stated goals of the Paris Climate Accords of two degrees.

So my view is this: The same water pollution concerns, methane concerns, seismicity concerns that you all care about — I believe we can solve those without overnight cutting off two-thirds of all natural gas supply in this country, pushing us back to coal, and threatening the livelihoods of millions of union households many of whom also live in battleground states. 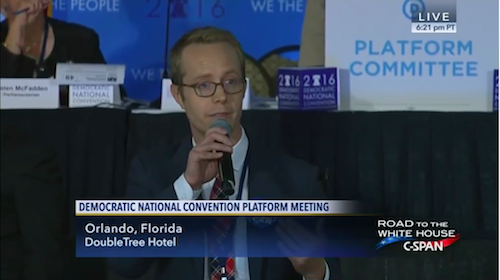 Democrats are committed to closing the Halliburton loophole that stripped the Environmental Protection Agency of its ability to regulate hydraulic fracturing, and ensuring tough safeguards are in place, including Safe Drinking Water provisions, to protect local water supplies. We believe hydraulic fracturing should not take place where states and local communities oppose it. We will reduce methane emissions from all oil and gas production and transportation by at least 40-45% below 2005 levels by 2025 through common-sense standards for both new and existing sources and by repairing and replacing thousands of miles of leaky pipes. This will both protect our climate and create thousands of good-paying jobs.

Though this policy falls short of the total ban on fracking that Sanders and his supporters called for (and will continue to fight for), his campaign website celebrated the compromise as ​“the most aggressive plan to combat climate change in the history of the party” and a huge overall win:

The right for communities to decide whether extraction takes place is a big deal. Many activists, including Thomas Linzey, the co-founder of the Community Environmental Legal Defense Fund (CELDF), believe reasserting local democratic control is the best antidote to out-of-control corporate influence. No matter what happens, as policy debates continue, it’s clear why Sanders has stayed in this race. Meanwhile, the Republicans met in Cleveland on Monday to begin hammering out the particulars of their own platform. I‘ll report on that next.

John Collins is the editor of Rural America In These Times. He lives between Minneapolis and La Pointe, Wisconsin, a village on Madeline Island in Lake Superior.
Have thoughts or reactions to this or any other piece that you'd like to share? Send us a note with the Letter to the Editor form.
More articles by John Collins
Rural America
The Community Rights Movement to the New Hampshire House: Let the People Decide What’s Best
Rural America
Democrats Have Gone off the Rails in Rural America. Can a New Report Get Them Back on Track?
Rural America
How Much Nitrate Is in Rural America’s Water?
Similar articles
ViewpointRural America
Oil Companies Have Plundered Louisiana's Coast. They Owe Us Reparations.
Native and Black communities suffering the most from coastal damage need reparations for past abuse while we fight for systemic change.
Courtney Naquin
Rural America
This Map Shows How Growing Seasons Are Shifting Due to Climate Change
EPA data shows that in some parts of the United States, the growing season is 50 days longer now than it was 1895.
Sky Chadde
Rural America
Toward a World Without Roadkill: Appalachians Make the Case for Wildlife Crossings
In Appalachia, highways fracture the habitat of bears, elk, deer and other wildlife. Locals are pushing to make roads safer for animals and drivers.
Frances Figart
Join our newsletter
Fearless journalism, emailed straight to you.
Subscribe and Save 59%