What Do Sage Grouse and Transgender Toilets Have in Common?

Based strictly on recent media critiques of the Republican Party’s 2016 platform — ​“Victorian,” ​“the stuff nightmares are made of,” ​“insane” — you’d think the party was planning to go on record in support of walling off Mexico, ostracizing gay and transgender people, outlawing pornography and powering the country with coal.

Okay, most of that’s true. But while the party continues to detrimentally mire itself in polarizing social issues, that was not the platform committee’s intention. On Monday, prior to hashing out amendments to the agriculture, energy and environment portion of their platform, the committee’s chair, Sen. John Barrasso (R-Wyo.), made the following remarks:

Today we assemble to lay a platform for America’s future. We consign to the just judgment of history the follies and offenses of the Obama administration, which has respected neither the American people nor the Constitution. Its combination of liberal ideology and ineffectiveness has crippled our economy, has undermined our health care and has disregarded the rule of law. It has turned the world into a cauldron of interlocking crises — leaving our military weak, our allies mistrusting, and our adversaries emboldened.

All of this is entirely too familiar. It reminds us of the world of 1980, after four years of Jimmy Carter, when an equally discredited presidency was called into account by the American people. Our response then was a Republican platform which told the truth. It told the truth both about our country’s peril and about our nation’s prospects. We must do the same in this platform today, and with the same unity and the same courage shown by those some 36 years ago made their Ronald Reagan platform a manifesto of liberty and opportunity for everyone. Let us remember and repeat for a new era and for new generations the concluding appeal of that platform. And so, in this Republican platform, we call out to the American people, with God’s help, let us now, together, make America great again.

The committee will present its finished product at the convention next week in Cleveland, but proposed amendments to the policies drafted offer plenty of insights into where the party is focusing its conservative laser beams. (To watch the 2016 Republican platform committee meeting on C-SPAN, click here.)

While coming down to the hard right of Donald Trump on social issues (who has been making efforts to reach out to ​“the gays”), the party-at-large clearly endorses his smoke-em-if-you-got-em approach to fossil fuels (See: ​“America First, Planet Be Damned: Trump Calls for Orgy of Extraction in North Dakota Energy Speech”). Platform delegates did insist on adding the word ​“clean” before the mention of coal in their document. As Rebecca Leber points out in her article in Grist ​“The Republican National Committee Just Officially Declared That Coal Is Clean,” the RNC’s language ​“just happens to reflect the same talking points favored by the lobby group American Coalition for Clean Coal Electricity.”

Regarding land management, as you might expect, numerous proposals were put forward to ​“reign in the EPA” and reverse what many conservatives view as eco-hogwash and federal land grabbing under the Obama Administration.

Some background: The federal government does indeed own 640 million acres of land (28 percent of the country) primarily in western states. Federal land ownership dates back to the 1803 Louisiana Purchase — 828,000 square miles for $11,250,000 (and the cancellation of French debts). Good real estate deal. Big League. Homesteading was much later followed by efforts to conserve large portions of land, often for national parks or to otherwise protect wildlife, and this has led to large swaths being declared off limits to commercial development. Whether that should change or not is a perennially contentious issue — one that, earlier this year, made international headlines when a group of armed protestors seized the Malheur Wildlife Refuge in rural Oregon demanding protected lands be opened up for cattle grazing. (Read my report on that incident here. This and similar anti-federalist-themed movements out West have been referred to as the sagebrush insurgency.) Meanwhile, some state governments simply believe they can do a better job managing the land in the interest of their constituents/​economies than the federal government. 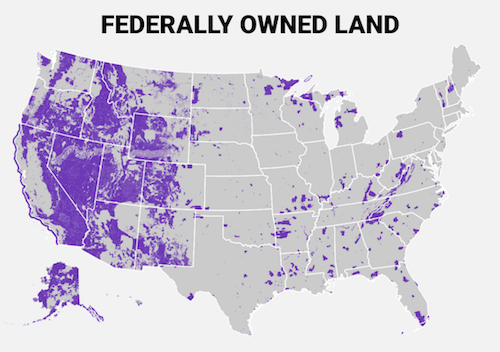 Whatever the committee’s stated land management positions were, Judy Eledge, a delegate from Alaska, didn’t think they went far enough and proposed an amendment specifically calling for the next administration to return federal lands to the states. A brief debate ensued as to whether this would apply to ​“certain” or ​“all” federal lands. Opponents raised the point that many states would not be financially able to assume the costs of managing more land. ​“We’re tired of waiting. … It’s time for Congress to pass legislation that gives federal lands back to the states to manage and have,” said Eledge, in an effort to sway the room. Prior to that, an amendment that included lifting restrictions on nuclear energy development was proposed to augment the platform’s existing support for ​“expediting the permitting process for mineral production on public lands.”

Both were favored by a majority of delegates and adopted.

In short order, the Endangered Species Act (ESA) also came under fire for endangering the economy. ​“Over the last few decades the ESA has stunted economic development, halted the construction of projects, burdened land owners and pursued policy goals inconsistent with the ESA,” read part of the platform, to which the following amendments were proposed:

[The ESA] should not include species such as grey wolves and other species if their species are existing elsewhere in healthy numbers in another state or counties [sic]. To upset the economic viability of an area with an unneeded designation costs jobs and hurts rural communities.

Additional background: By the mid 20th century, following centuries of aggressive kill policies, grey wolves had been all but exterminated in the lower 48. Eleventh hour conservation efforts, as well as the reintroduction of wolves into Yellowstone in 1995, succeeded and, in recent years, the grey wolf’s endangered status in the Midwest has fluctuated between protected, then hunted, then protected again. In short, wolves kill cattle, which costs ranchers money. But it’s illegal to shoot endangered species, which is often the source of tremendous friction between ranchers and state and federal wildlife management agencies. Trophy hunts are another issue. Generally speaking, sport hunters do not like it when the government tells them they can’t kill something. (See: Do We Need Wolves?)

While the grey wolf proposal was quickly adopted, it was followed by an additional proposal to that same portion of the platform — this time to include language directly addressing the prairie chicken and sage grouse. (See: ​“The Grouse That Roared: Will Voluntary Conservation Efforts Work in the Intermountain West?”) Long story short, populations of these birds have declined 97 percent over the last century, but recent measures to protect them have had also had an annoying habit of impeding commerce, particularly the dealings of the fossil fuel industry.

Unlike many of the other proposals, this one spurred an almost spirited debate. 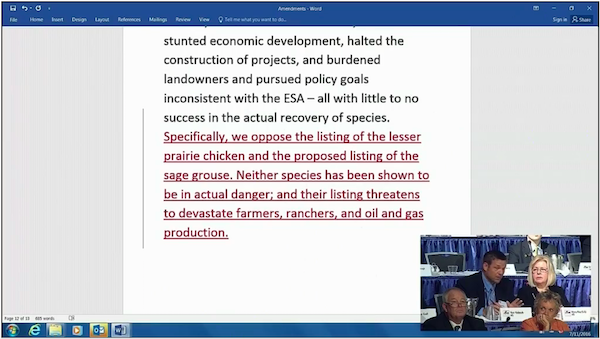 Kris Kobach, the delegate from Kansas who suggested the additional language, explained, ​“For those of you not familiar with this issue, of the prairie chicken and the sage grouse, it’s having a devastating impact on states in the plains and the mountain west. The plains states that are affected by the prairie chicken are Kansas, Oklahoma, Texas, Colorado and Nebraska. The mountain states where the sage grouse is an issue are Colorado, Utah, Idaho, Wyoming, North Dakota, South Dakota, Oregon, Washington, California, Nevada and Montana. … You might think this is a narrow issue, but it’s not. It has a huge impact on oil and natural gas and ranching in all of these states.”

Kobach went on to accuse the Fish and Wildlife Service (FWS) of using drought conditions, which he says only temporarily affected the birds’ populations, to recommend ​“drastic” protective measures that amount to a textbook example of ​“executive overreach.” He added, ​“If you’ve never heard of prairie chickens, or seen one, I invite you to come hunting with me in Kansas some time and we’ll kill one together and look at it.”

Though one delegate said he’d take Kobach up on the offer, he and a handful of other delegates opposed the amendment — mostly on grounds that once you start adding specific animals to avoid protecting, the list will just go ​“on and on.” This led to a delegate from Michigan to declare, ​“I think, to be really Republican, maybe we should talk about eliminating the ESA.” People clapped. But delegates from New Mexico and Nevada maintained it was important to address the birds specifically in the platform.

“I’m from one of these Western states that deals with these sorts of issues,” said Jonathan Gardner of New Mexico. ​“This is very real.” He therefore proposed an amendment to the amendment that would strike the word ​“specifically” and add ​“for example.”

Andy Aplikowski, a delegate from Minnesota, continued to resist the language:

“What we’re creating here is a marketing document that we can use to talk to independent and swing state voters, and convince people why they should vote Republican. If somebody glances at this and sees ​‘we oppose chickens’ it’s not going to go well for us out on the campaign trail.”

Others agreed, expressing a similar opinion that, while the issue was very important, such specifics were better addressed by way of Congressional legislation and didn’t belong in the platform per se. Again, supporters of the language doubled down arguing that, because the Republicans are trying to be the party of economic development, and these particular birds are getting in the way of that, they warranted explicate mention.

Ultimately, both Kobach and Gardner’s amendments were adopted.

Notably absent from this portion of the C-SPAN event were the often fiery exchanges on display at the Democratic Platform Committee a few days earlier. While one could argue that the Ted Cruz wing of the party swayed the Republican platform to the right in the same way Bernie Sanders’ supporters dragged the Democrats to the left, disagreements came and went fairly quietly, usually ending in agreement.

One exception involved an amendment proposing that the Republicans go on record proposing that Americans receiving Supplemental Nutrition Assistance (SNAP) benefits not be allowed to purchase ​“junk food” with taxpayer dollars. This one was sternly shot down by Andy Pozner, a delegate from California, who said, ​“I hope we don’t become the party of the food police.” It was also opposed by the aforementioned Judy Eledge of Alaska, who said, ​“I’m not going to support this because I do not think it is the guiding principal of the Republican party platform to define junk food.” The amendment was defeated. 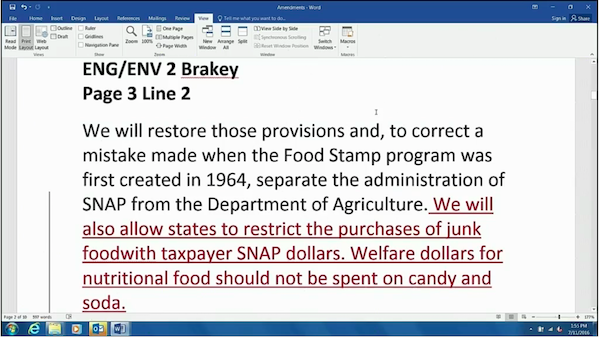 John Collins is the editor of Rural America In These Times. He lives between Minneapolis and La Pointe, Wisconsin, a village on Madeline Island in Lake Superior.
Have thoughts or reactions to this or any other piece that you'd like to share? Send us a note with the Letter to the Editor form.
More articles by John Collins
Rural America
The Community Rights Movement to the New Hampshire House: Let the People Decide What’s Best
Rural America
Democrats Have Gone off the Rails in Rural America. Can a New Report Get Them Back on Track?
Rural America
How Much Nitrate Is in Rural America’s Water?
Similar articles
LaborRural America
After Yellowstone Floods, Tourism Workers Lose Their Jobs—And Their Housing
Many Yellowstone workers depend on their bosses for a place to live. When the flood washed away their jobs, they lost their housing, too.
Joseph Bullington
Rural America
Five Ways Pope Francis Can Overcome the Irony that Threatens Laudato Si’
Libby Comeaux
Rural America
Local Economies to Save the Land and the People
Wendell Berry
Join our newsletter
Fearless journalism, emailed straight to you.
Subscribe and Save 59%