Heroin Doesn’t Care Where It Is: HHS to Distribute Naloxone to Rural Areas

The Center for Disease Control (CDC) recently found that, since 2010, 28 states have experienced a rise in the number of heroin related deaths. Many of the counties most affected are in rural areas. The changing demographics of heroin use — the long-considered inner city plight now overwhelming suburban and small towns — is not without explanation.

The abuse of prescription painkillers has been a growing national problem for over 20 years. Generic drugs like hydrocodone and oxycodone — branded as Vicodin and OxyContin (and Percocet) respectively — are pharmaceutical grade opioids that suppress how our nervous systems respond to pain signals. These drugs work. They are also highly addictive and expensive. Once dependent, the addict can quickly find him or herself at the mercy of an un-fillable prescription. Enter heroin.

Like many diseases, left untreated, addiction progresses. And at some point, almost invariably, accommodating a drug habit boils down to economics. Unfortunately, all too often in this country, so does treatment. The Rural Assistance Center (RAC), explains that, in addition to geographic isolation, ​“lower socio-economic status, higher rates of risk behaviors, limited job opportunities and fewer physicians,” all contribute to the health care disparities prevalent in many rural areas. Meanwhile, where opioid pills can cost $50 or $60 for a seemingly satisfactory fix, heroin can achieve the same (albeit more potent) ends for as little as $10.

As Mexican drug cartels grow increasingly adept at moving their product into new markets outside of major cities, heroin presents a cheaper alternative to those individuals already familiar with, if not dependent on, routine opioid use. That’s not to say that some people will not try heroin simply because it’s there, but the aforementioned CDC study also concluded that the majority of new heroin users used prescription drugs first. Meanwhile, community health care and social service providers in small towns in states like Maine, Tennessee, Ohio and West Virginia find themselves unprepared to handle the social and medical fallout of a drug notorious for accidentally killing its user.

As data gathering organizations like the CDC, the National Council on Alcoholism and Drug Dependence, American Society of Addiction Medicine and National Institute on Drug Abuse work to accurately gauge the severity of the problem (no easy task), the U.S. Department of Health and Human Services (HHS) recently established a fund to make available, to rural communities, a drug that can save lives by reversing the body’s innate response to an overdose.

The Rural Opioid Overdose Reversal (ROOR) Grant Program supports the purchase and distribution of naloxone (a drug that reverses symptoms of a drug overdose), and the training for its use by licensed healthcare professionals and emergency responders in rural areas. According to the CDC, prescription opioid abuse is more common in rural communities. In 2013, rates of death involving an overdose of prescription opioids were higher in rural counties than urban counties.

“Opioid injuries and overdoses are very real and have a devastating impact on far too many families,” says Burwell, who has made addressing opioid abuse, dependence and overdose a priority. ​“But there are actions we can take to save lives and turn these trends around. This funding is critical to getting naloxone into the hands of the people who can use it to save lives, reducing opioid related deaths in rural communities across this country and curbing the opioid epidemic.”

The pilot program, developed by HHS’ Federal Office of Rural Health Policy at the Health Resources and Services Administration (HRSA), will support partnerships formed at the local level to coordinate care. As a requirement of the grant, each awardee must be part of a rural partnership comprising two or more organizations representing local emergency responders, health facilities, academic organizations, fire departments, law enforcement, and other non-profit or for-profit entities involved in the prevention and treatment of opioid overdoses. The partnerships will work together to increase the availability and use of naloxone in rural communities. They will also emphasize the importance of referring those with an opioid addiction to an appropriate substance abuse treatment center.

“The incidence of opioid overdoses in rural communities is alarming,” says HRSA Acting Administrator Jim Macrae. ​“This funding will help communities save lives and direct those who need help to available services.” 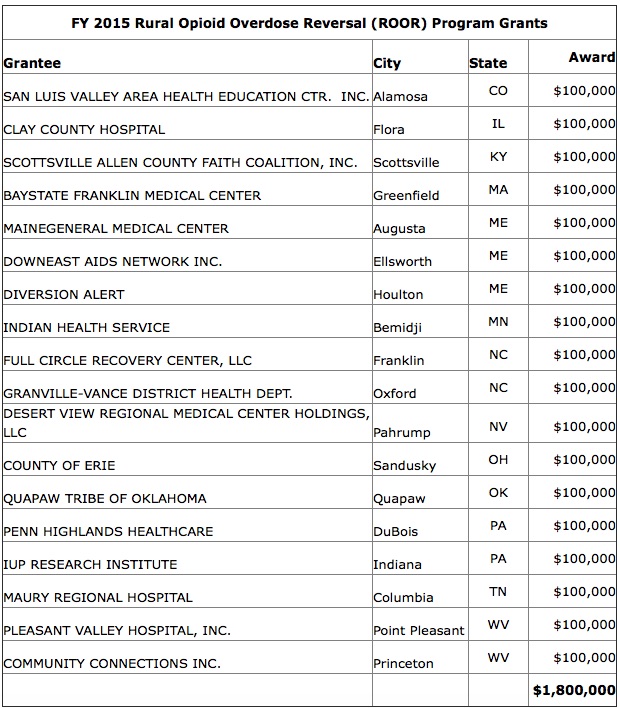