Bioneers is a progressive nonprofit organization that, for the last 26 years, has hosted an annual conference where people gather to learn about and discuss the issues facing our culture and planet.

Two weeks ago, for the 16th consecutive year, the weekend-long event was held at the Marin Center in San Rafael, California. Seizing an opportunity to hang out together, four members of the Rural America In These Times (RAITT) team were in attendance — Polly Howells (a member of the RAITT Board of Editors, the In These Times Publishing Consortium, and a member of the Bioneers Board of Directors), Joel Bleifuss (editor & publisher of In These Times and there for the second year in a row), Dayton Martindale (former RAITT intern, current RAITT contributing writer and a student at the UC Berkeley Graduate School of Journalism University) and me (who, like Dayton, was a first time Bioneer).

The Bioneers conference tradition, one quickly learns, involves a well-established routine. Each morning begins with an outdoor yoga session at 7:45 … for those interested. At around 8:30, tribal drumming (from an impressive duo) begins echoing out of the massive Veterans Memorial Auditorium (designed by Frank Lloyd Wright). This is a well understood signal by those who have attended the conference before that it’s time to make your way inside, dance in the aisles if you feel like it (which many do), sit if you don’t, and wait for the morning’s line-up of keynote speakers to begin at 9:00. 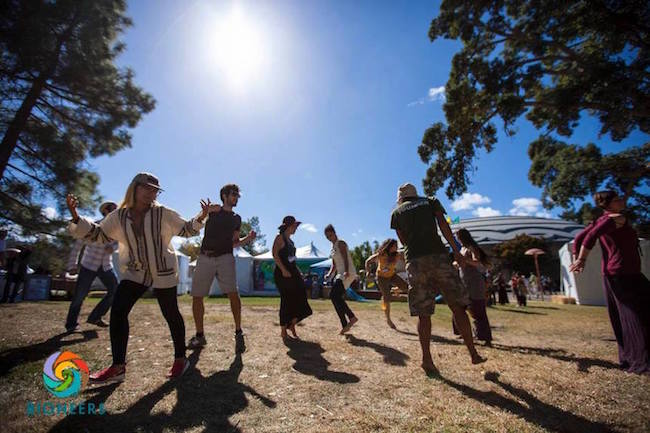 When in doubt, Bioneers have a tendency to dance. (Photo: Bioneers)

Over the next three days these morning presentations covered a spectrum of social, environmental and spiritual issues. Speeches, with titles like Navigating Adaptation and Resilience as Un-sustainability Hits the Tipping Point, Crowdsourcing the Feminine Intelligence of the Planet, Climate Change and Health, Self-Organizing Community Democracy for the Internet Age and Both/​And/​All: Environmentalism and Racial Justice, were more often than not followed by standing ovations. This last one, a powerful (often funny) speech delivered by activist, journalist and author Rinku Sen (the publisher of Col​or​lines​.com and the founder of the racial justice organization Race Forward) is worth keeping an eye out for when conference footage becomes available online. RAITT will excerpt it when it does.

Perhaps like many of you, I tend to compartmentalize my thoughts on the environmental movement in a different place than I do my assessments of racial justice (or agricultural sustainability, economic inequality, animal rights, you name it) — each has its own spot and I don’t readily look for ways in which they might be connected. Sen’s speech, while calling out the environmental movement for its startling lack of diversity (followed by a murmur of self-deprecating chuckles from the largely white audience) made a compelling case as to why that needs to change. Consciously or not, excluding people of color, many of whom live in communities which to stand to benefit the most from a radical shift towards environmentally responsible practices, amounts to a glaring oversight in the movement. This presentation was a highlight.

Following the morning’s keynote speeches, the Bioneers break for lunch. In the outdoor ​“food village,” the lines to the various organic, sustainably sourced, vegan and/​or gluten-free vendors that catered the event, were long but so was the lunch period. (The food was expensive, but everything tasted good.)

On Day 3, between lunch and the afternoon panels, I spotted an ​“Empathy Tent” on the map of the grounds (provided) and went to investigate. Located on the conference’s outskirts, next to the yoga classes, this recent addition to the Bioneers line-up was not experiencing heavy traffic. I felt for them.

For others, this important downtime offered the time needed to consult their 72-page Bioneers itinerary and begin the arduous process of choosing which panels they wanted to attend for the rest of the afternoon. Carbon Farming: Soil Not Oil, The Art of Empathy: Honoring your Emotional Ecosystem, Greening Corporate Behavior: The ​“Good Cop/​Bad Cop” Strategy, Native Land Trusts: Returning to a Land They Never Left—these are just a few of the dozens of similarly eclectic, smaller expert-led discussions offered throughout the day. 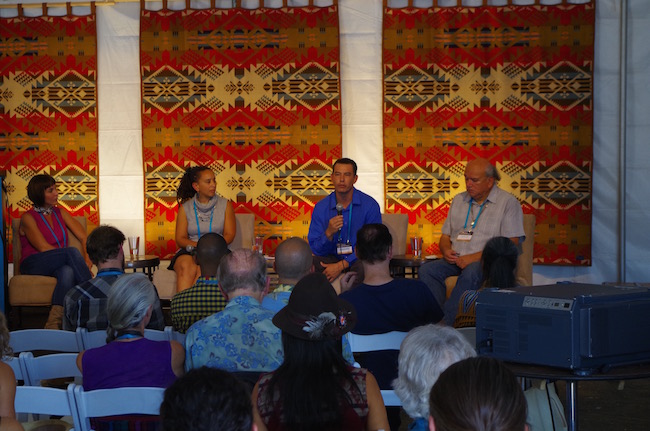 Because my primary objective was to mine the conference for data relevant to Rural America In These Times, I let practicality rather than baffled curiosity dictate my decision-making.

In the middle of the fairgrounds, another tent housed the Indigenous Forum. Here, members of tribal councils from all over the country gathered to discuss the wide range of issues facing their different communities. Invasive mining interests, water management and preserving cultural traditions for the next generation were common themes.

I also attended a panel called Curbing Corporate Power to Develop a Just Food System led by president of the National Family Farm Coalition, Ben Burkett. A descendant of slaves who is still farming the Mississippi land his great-grandfather homesteaded in 1889, Burkett spoke of the rise of the biochemical/​industrial ag industry’s power and its current stranglehold on small to medium-sized growing operations. Suffice it to say, Burkett is no fan of Monsanto.

Much of what I learned, and the people and organizations I encountered will no doubt be popping up in future RAITT stories. All told the trip was a worthwhile success. The conference did a good job, by and large, of remembering the importance of optimism when addressing the most tragic aspects of human behavior.

I did make one exception in my otherwise practical approach to the Bioneers conference. I attended a panel led by well-known science-fiction author and self-described Buddhist Marxist, Kim Stanley Robinson. A huge fan of the genre, and Robinson’s Mars Trilogy in particular, I decided this could not be missed. Earlier in the day, ​“Stan,” as he’s known to repeat conference goers, had delivered a keynote speech in the auditorium entitled Rethinking Our Relationship to the Biosphere: A Utopian Vision of a New Economic Paradigm. When footage of the keynotes becomes available online in December, I highly recommend checking it out. (Like Rinku Sen’s talk, his too will be transcribed on RAITT.) In a half an hour, he articulated the dangerous absurdity of humanity’s current trajectory and then weaved a radical and futuristic, yet not impossible, vision of what life on this planet could become if we change course — now. 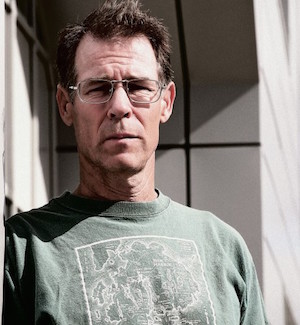 Here’s what the rest of the team had to say:

Polly: Many of the afternoon panels were experiential and interactive — a welcome departure from the sit-and-listen approach of years past. Clare Dakin’s (of Tree Sisters) sessions exploring the body map of our masculine and feminine natures were noteworthy. Also new this year was a Family Fair, where children under 14 had a chance to do hands-on environmentally friendly science experiments and go on a nature walk (my six-year-old and 10-year-old granddaughters enjoyed this).

Joel: As their name suggests, Bioneers come together each year to discuss how we can best head out into the unsettled future — preferably a future that reveres and protects the earth’s biosphere and the web of life that depends on it. The speaker who impressed me most was Ben Knight, a 20-something guy who was one of the co-founders of Loomio Co-operative Limited, a Wellington, New Zealand, based co-op of tech-savvy activists. Knight and his friends have invented Loomio, an open-source online tool of collaborative decision making. Knight explained that his inspiration was the dysfunctional decision-making process — one that privilaged those activists who had the stamina to endure endless meetings and who lacked nine-to-five jobs or family responsibilities — that characterized the 2011 Occupy movement. The Loomio website puts it more politely:

Loomio emerged from the need for a scalable way to make inclusive group decisions during the Occupy movement in 2011. We experienced the transformative potential of collaborative decision-making, as well as its severe limitations: if people have to be in the same place at the same time to participate, it can never scale. We set out to build a solution to this problem: using the Internet to give people an easy way to make good decisions together, wherever they are. It’s called Loomio, like a loom for weaving diverse perspectives together :)

To date Loomio has been used by 60,000 people in 93 countries to make more than 25,000 decisions. The majority of Loomio users are in Spain, where the democratic decision making tool has been adopted by Podemos. Once it becomes available, Rural America In These Times will be posting a transcript of Knights talk.

Dayton: I only made it to the conference for the last day, but I’m glad I did. Like John, I found Kim Stanley Robinson to be the highlight. Knowledgeable, witty and frighteningly articulate, his cogent case for action on climate change and economic inequality deserves to be heard far and wide. I have since read the first 150 pages of his novel Red Mars, and am pleased to report he is capable of producing powerful visions of the future on more than one planet.

But Stan was not the only attraction: I saw a panel on bold new projects in green architecture and design, a thoughtful presentation on restorative justice and a strange but fun storytelling session featuring Michael Meade and John Densmore, the drummer of The Doors. The ideas of Bioneers were innovative, reflective and more than a little weird — everything I’d want a truly just and sustainable society to be. 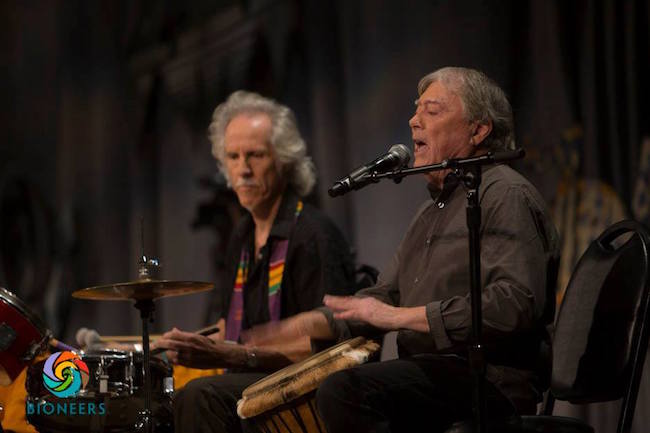