On Sunday night, near the Backwater Bridge on Hwy 1806 in Morton County, N.D., law enforcement officers used water cannons in below-freezing temperatures to disperse people protesting the Dakota Access Pipeline (DAPL). An estimated 400 demonstrators, who refer to themselves as water protectors, were attempting to dismantle a nearly month-old roadblock that they say is preventing emergency services from quickly accessing the Oceti Sakowin (Seven Council Fires) protest camp and the Standing Rock community at large.

In a statement released Sunday night at 11:11 p.m. local time, camp medics reported that 167 people had been injured (three of whom were elders) and seven had been hospitalized with ​“severe head injuries.” Many were being treated for hypothermia. By Monday night, the official number of reported hospitalizations had risen to 17.

Amid growing public concern that Republican Gov. Jack Dalrymple is essentially authorizing the use of militarized force against Native Americans on behalf of a Texas-based energy company, combined with palpable fear of what Donald Trump’s denial of climate change might mean for our nation’s approach to the environment, many are criticizing the Obama administration’s decision to remain silent on the issue.

“Standing Rock is the moral center of the nation right now,” Bill McKibben the founder of 350​.org told Grist. ​“The real question is why there’s no response from the White House to the kind of abuses that would make us protest loudly if they happened abroad.” 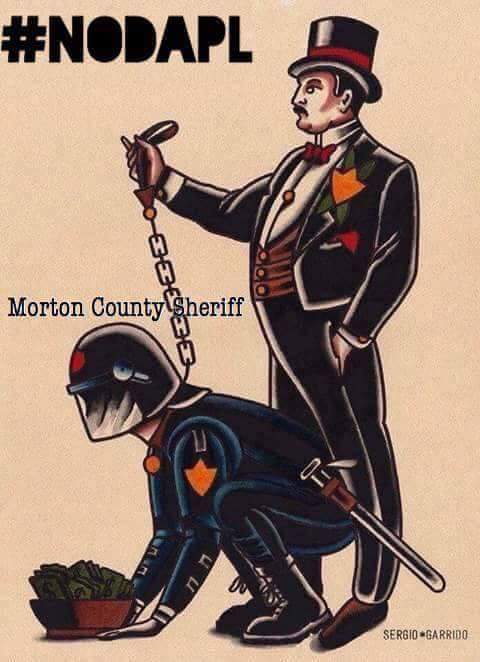 The Backwater Bridge, which crosses over Cantapeta Creek to the north of the Standing Rock Indian Reservation, has been closed and barricaded by state officials since October 27 when police from multiple state agencies conducted a similarly violent crackdown on the ​“1851 Treaty Camp” — a temporary encampment directly in the path of the nearly completed pipeline. The Standing Rock Sioux maintain the land in question, recently acquired by Texas-based Energy Transfer Partners, is unceded Dakota territory as affirmed in the Ft. Laramie Treaty of 1851. 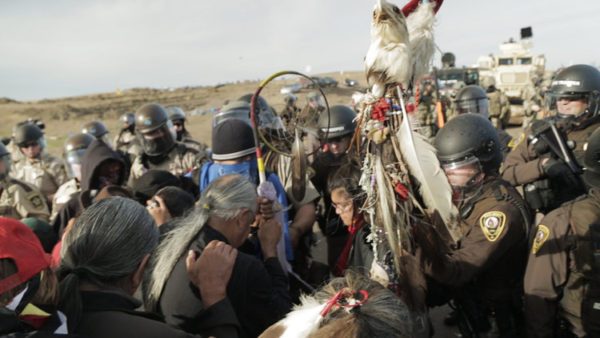 During the late-October clash, military vehicles blocking the Backwater Bridge were set on fire and 147 people were arrested. But instead of removing the damaged vehicles, state officials left them where they were and, citing potential structural damage to the bridge as a result of the flames, closed the highway. Now, according to a spokesman for Dalrymple’s office, the area must be free of protestors before it’s declared safe enough for engineers to make a damage assessment and, if necessary, repairs before reopening the public road. In the meantime, water protectors claim that by keeping the highway closed the state is strangling the local economy and unnecessarily putting Native lives at risk.

According to a press release issued yesterday by 350​.org, a global environmental advocacy group currently working with Standing Rock:

Despite the obvious public safety risk, and despite promises from Morton County that they would clear the road, law enforcement has insisted on keeping the vehicles on the bridge for weeks. This obstruction of Highway 1806 threatens the lives of the water protectors and residents of the Standing Rock Sioux Reservation, as emergency services have been needed but unable to reach camp quickly. The blockage also unjustly restricts the free movement of local residents and hurts the Tribe economically by cutting off travel to and from the Prairie Knights Casino. Images of the burned vehicles have fed negative, distorted, and sensationalist media portrayals of the encampment.

Dallas Goldtooth, an organizer for the Indigenous Environmental Network called the use of water cannons ​“an excessive and potentially deadly use of force.” He says that due to the police enforced roadblock, ambulances currently need an extra 30 minutes to get to and from the hospital. ​“Those are life and death numbers right there,” says Goldtooth, ​“and Morton County and the State of North Dakota will be responsible for the tally.” 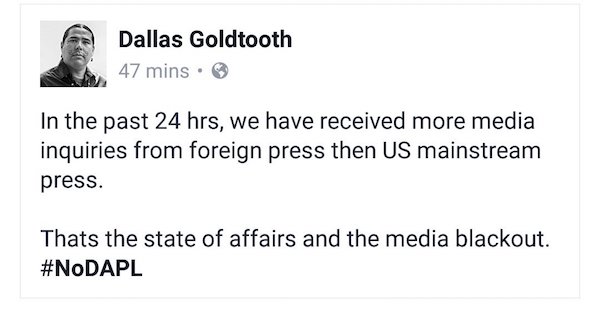 On Monday afternoon, the Morton County Sheriff, Kyle Kirchmeier, and Mandan Police Chief Jason Ziegler held a joint press conference to update the public and field questions from the media about their ongoing handling of Standing Rock protest camps, now entering their seventh month. Citing ​“very aggressive” behavior on the part of demonstrators on Sunday night, both officials largely stood by their actions. When a reporter asked the Sheriff directly, ​“Were water cannons used on the protestors last night?” Kirchmeier responded:

“No, we don’t have water cannons. I don’t know where the term ​‘water cannon’ comes from. This was just a fire hose. Basically the fire trucks got called down there because of the numerous fires that were occurring as these activities took place….As a result of that, some of the water was used to repel some of the protest activities.” 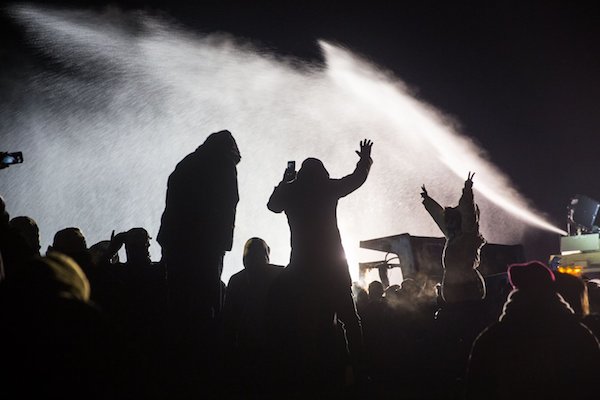 But Linda Black Elk, of the Catawba tribe and a member of the Standing Rock Medic and Healer Council, told NBC News that she treated numerous people for hypothermia and cited ​“the real risk of loss of life due to severe hypothermia under these conditions.” Physicians and tribal healers at Standing Rock have since called for ​“the immediate cessation of use of water cannons on people who are outdoors in 28F ambient weather with no means of active rewarming in these conditions.”

When asked if he anticipated using similar tactics against protestors in future confrontations, Chief Ziegler said it ​“depends on the circumstances.” 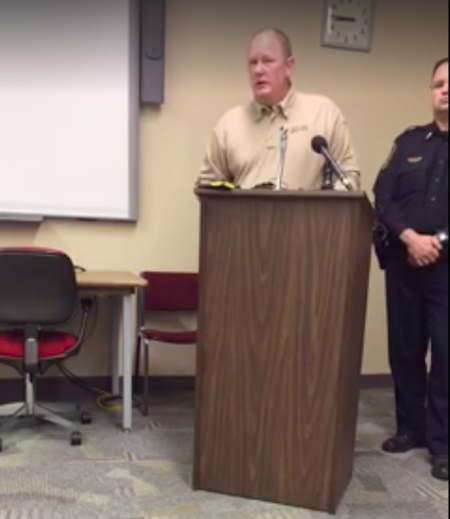 In other important news, on the (increasingly diabolical) financial side of this fiasco, Sunoco Logistics (NYSE: SUN) has just announced that it will be acquiring Energy Transfer Partners (NYSE: ETP), the company behind the Dakota Access Pipeline, in a forthcoming $20 billion merger. While rising energy prices sent U.S. stock markets to record highs on Monday, Sunoco shares briefly fell as much as 7.5 percent as potential investors kept one eye on North Dakota. 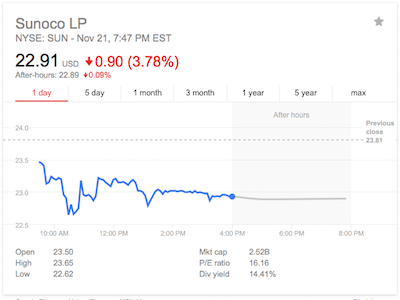 (Ed. Note 11/22: This afternoon, in an interview with the New York Times, Donald Trump acknowledged that there is ​“some connectivity” between humans and climate change. He had previously said climate change is ​“a hoax” perpetrated by the Chinese.)

Get your copy
John Collins is the editor of Rural America In These Times. He lives between Minneapolis and La Pointe, Wisconsin, a village on Madeline Island in Lake Superior.
Have thoughts or reactions to this or any other piece that you'd like to share? Send us a note with the Letter to the Editor form.
More articles by John Collins
Rural America
The Community Rights Movement to the New Hampshire House: Let the People Decide What’s Best
Rural America
Democrats Have Gone off the Rails in Rural America. Can a New Report Get Them Back on Track?
Rural America
How Much Nitrate Is in Rural America’s Water?
Similar articles
Rural America
Meet the Appalachian Women Facing Down the Mountain Valley Pipeline
Across years and several southern states, these organizers have helped drive the massive gas pipeline to the brink of defeat.
Ben Bolling
Rural America
In North Carolina’s Tobacco Fields, Guest Workers Battle the “Green Monster”
The state’s tobacco harvest increasingly relies on guest workers, who face nicotine poisoning and what advocates say are inadequate labor protections.
Da Yeon Eom
Rural America
Here’s How Biden Could Help Fix the Rural Healthcare Crisis
Since long before Covid, rural health has suffered from federal misunderstanding and neglect.
Lauren Hughes and Sameer Vohra
Join our newsletter
Fearless journalism, emailed straight to you.
Subscribe and Save 59%