On Monday, the day after the USACE announcement, a blizzard moved through much of central North Dakota. While many had been anticipating the arrival of freezing weather for months, scores of people who had travelled to Standing Rock to support the tribe over the weekend were caught unprepared by the storm and sought shelter on the reservation at the Prairie Knights Casino and Resort. The general manager of the casino, Everett Iron Eyes Jr., told local reporters 600 to 700 people spent Monday night there — many happy to sleep in hallways if it meant staying warm.

Staying warm in North Dakota this time of year isn’t easy. The projected high temperature in Cannonball, N.D., today (Dec. 8, 2016) is 2 degrees. The low is negative 14.

Acknowledging that the fight isn’t over, but concerned for the safety of all parties involved, Archambault encouraged everyone to leave the campsites as soon as possible — even, he said, if ETP continues drilling towards federal lands in an effort to provoke campers. ​“We do not need to engage them in this; we need to go home,” wrote Archambault, ​“While this phase of the struggle relied largely on the protectors at camp, this next stage will be focused on the legal battles, and keeping the current decision in place.”

The fate of the nearly-completed, $3.7 billion project is uncertain. Though the USACE decision suggests alternate routes be explored while a full environmental impact statement (EIS) is prepared, company executives were quick to reassure their investors they remain ​“fully committed” to finishing the pipeline. Fearing ETP will drill under the reservoir anyway and simply pay a fine after the fact, many water protectors and their supporters are skeptical of leaving. But Archambault maintains that the increasing risk of injury or death, due either to extreme cold or further confrontations with law enforcement, now jeopardizes all that has been accomplished.

Our great leaders of the past would never put the people at risk of harm, especially women and children. I don’t want anyone to be living in an unsafe environment. We need to stay in prayer, believe in our prayer, and begin our journey home in prayer. I believe in my prayers and in the Creator. Take the lessons we learned here and apply them at home — unity, peace, prayer.

As the skies began to clear on Wednesday, however, many protestors were still debating whether leaving was the best course of action. Rumors that the phrase ​“come inauguration day” had been used in leaked internal ETP emails circulated on social media — reenforcing the popular expectation that Donald Trump will reverse the USACE decision the moment he takes office. Mark Tilsen, of South Dakota, told the Rapid City Journal that many people were leaving after Monday’s blizzard, but that he and others planned to stay. Tilsen wrote on his Facebook page: ​“Ain’t over until I’m smoking a cigar on the drill pad.”

Echoing Archambault’s request, organizers of Veterans Stand for Standing Rock—a recent demonstration in which thousands of soldiers travelled to the Oceti Sakowin camp to protect water protectors from police violence and demand action from the federal government — called for all of its members to respect the wishes of Tribal elders and evacuate as soon as possible: 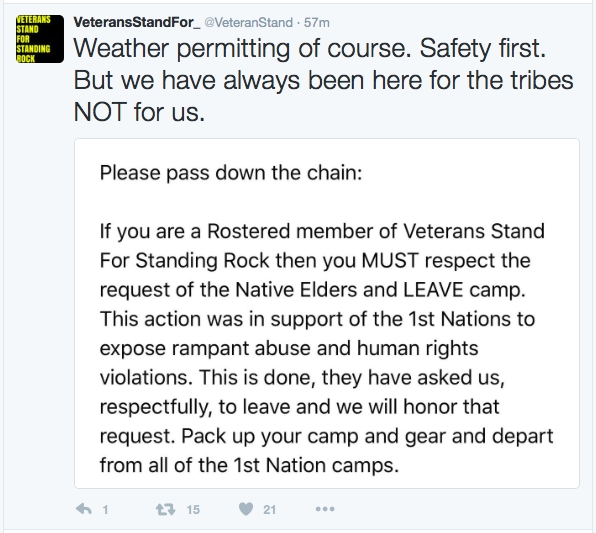 The #NoDAPL movement and public support for the Sioux, in some cases, has managed to transcend partisan politics and bring people together. But there are also those who feel equally passionate about spending their free time using racist threats to stand up for faceless multinational oil interests in motel parking lots. On Wednesday afternoon, a chilling video of a Standing Rock Sioux tribal member and his friend getting cut off in their vehicle and threatened by a group of masked men outside a Ramada Inn in Bismarck, N.D., went viral. Those guys either hate Indians or really love oil. It’s not fair to speculate who the men behind the masks voted for, but in 42 days the administration responsible for this temporary pause in pipeline construction will be gone and replaced by President-elect Donald Trump — a man who while on the campaign trail in North Dakota last May headlined an annual oil and gas industry conference in Bismarck, hinted at a bright future for coal and enthusiastically declared:

But Archambault’s statement is cautiously optimistic. He says reversing Sunday’s historic decision will not be easy for the next administration and that ETP ​“will face an uphill battle in trying to dismantle the process initiated by this decision.” He also reminded everybody engaged in this fight that while the Dakota Access pipeline managed to grab the world’s attention, countless other pipelines do not. (Coincidentally, on Monday, a leaking pipeline was shut down 200 miles west of Standing Rock. For whatever reason, the mainstream media failed to pick up the story.)

I know this is a victory for this one DAPL battle, but we have not yet won the DAPL war. There will be more battles ahead and we will continue to strategize and win. The camp has brought us this far — now it is time we pivot to the next phase of this struggle. That will be lead on different fronts like in court, with the new Administration, with Congress, and with the investors.

I am asking each and every one of you to come up with a strategy to close and exit the camp. I respectfully ask that you leave the land as it was when you arrived, and return home before the winter grows more severe. Pass this on — let everyone know that we are thankful for their passion and commitment and we are thankful for them all standing with us. It’s time now to enjoy this winter with your families. We need all to respect the host tribe’s wishes. We are asking all tribes to pass this on to their members. 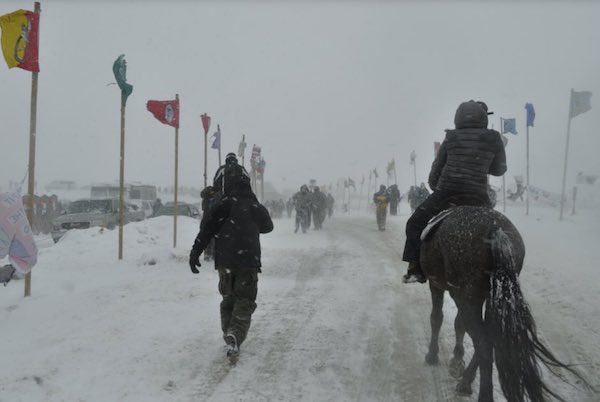 John Collins is the editor of Rural America In These Times. He lives between Minneapolis and La Pointe, Wisconsin, a village on Madeline Island in Lake Superior.
Have thoughts or reactions to this or any other piece that you'd like to share? Send us a note with the Letter to the Editor form.
More articles by John Collins
Rural America
The Community Rights Movement to the New Hampshire House: Let the People Decide What’s Best
Rural America
Democrats Have Gone off the Rails in Rural America. Can a New Report Get Them Back on Track?
Rural America
How Much Nitrate Is in Rural America’s Water?
Similar articles
2022 MidtermsCover StoryFeatureRural America
The Rural Vote Is Again in Play
The midterms showed that rural voters must be an integral part of the Democratic strategy if they want to win in 2024.
George Goehl
Rural America
The Curious Case of Carter County: How a Small Town in Montana Stopped Shrinking
On the Great Plains, these days, rural towns tend to wither. But in remote eastern Montana, one community is bucking that trend. How?
Eric Dietrich
Rural America
Study: “Salmon Remain on the Brink of Extinction. And Time Is Running Out.”
Between dams and warming waters, West Coast populations of wild salmon have plunged by 98%. What will it take to stop the decline?
Tara Lohan
Join our newsletter
Fearless journalism, emailed straight to you.
Subscribe and Save 59%