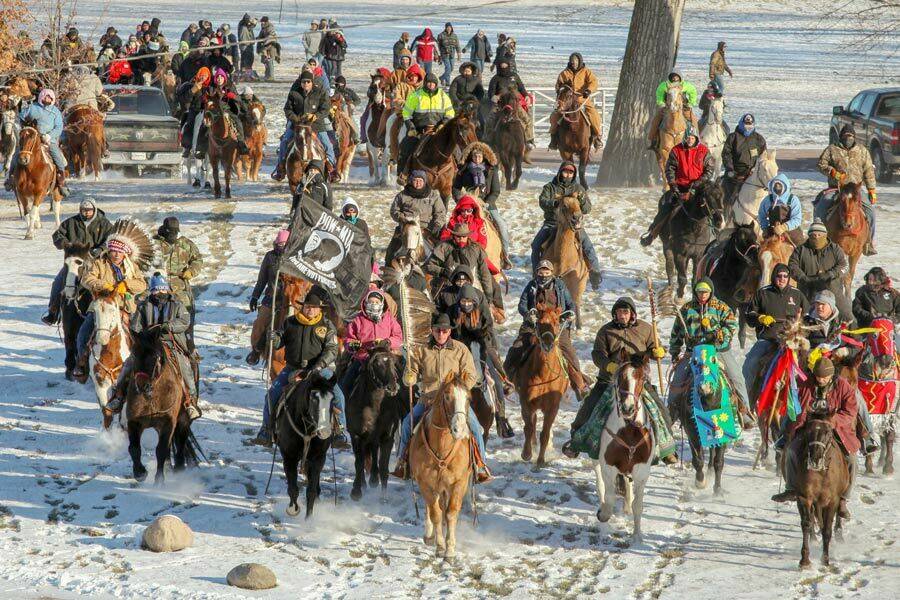 Riders on horseback commemorate the 1862 hanging of 38 Dakota men, the largest mass execution in U.S. history. (Photo by Denice Woller)

Share Tweet Copy Link Email Print
Published in
February 2018
MANKA­TO, MINN. — On Dec. 26, 2017, Mankato’s salt-caked streets awoke from their sub­ze­ro slum­ber to a thun­der of rid­ers on horse­back lop­ing down the asphalt of River­front Dri­ve. A wave of steam emanat­ed from the hors­es and rid­ers. Lead­ing the charge was Jim Miller, an elder of the Cheyenne Riv­er Reser­va­tion in South Dako­ta. Wear­ing a black cow­boy hat, he held the reins in his left hand and in his right a wood­en staff arrayed with dozens of eagle feathers.
Blocks away, a crowd of more than 100 gath­ered at Mankato’s Rec­on­cil­i­a­tion Park. Some tied prayer rib­bons on a near­by memo­r­i­al, await­ing the rid­ers at the end of the 13th annu­al Dako­ta 38+2 Wokik­suye Ride. The near­by banks of the Min­neso­ta Riv­er hissed and crack­led as ice frag­ments crashed into the shore. ​“Remem­ber the 38” was spray-paint­ed on the lev­ee wall.
Over a span of 17 days, rid­ers had trekked 330 miles from Low­er Brule Indi­an Reser­va­tion in South Dako­ta across the north­ern plains to hon­or 38 Dako­ta men hanged here on the orders of Abra­ham Lin­coln in 1862 — the largest mass exe­cu­tion in U.S. history.
As the rid­ers approached, Jon Eagle Sr., the Trib­al His­toric Preser­va­tion Offi­cer of the Stand­ing Rock Sioux Tribe, quot­ed one of those hanged over the loud­speak­er: ​“Remem­ber today, because today is not a day of defeat, but a day of victory.”
Many of the more than 50 rid­ers and their sup­port­ers in the Dako­ta dias­po­ra are descen­dants of those who were exe­cut­ed, return­ing to their ances­tral homeland.

By 1858, under threat of mil­iary action from the Unit­ed States, the Dako­ta had ced­ed much of their land, includ­ing the fer­tile north­ern side of the Min­neso­ta Riv­er. Forced onto a reser­va­tion and unable to hunt out­side their small tract of land, the Dako­ta became reliant on the goods and ser­vices of set­tler traders in addi­tion to the annu­ity pay­ments that had been promised by the U.S. gov­ern­ment. Most often, these annu­ity pay­ments were nonex­is­tent, delayed or paid direct­ly to the traders, who sold the Dako­ta goods on credit.

“Remember today, because today is not a day of defeat, but a day of victory.”
In August 1862, spurred by starvation, the Dakota revolted; the fighting lasted six weeks. More than a thousand Dakota were arrested and interned. Out of 392 tried, the U.S. military sentenced 303 to death for murder and rape. Lincoln commuted the sentences of all but 39, with one acquitted before the hanging.
On Dec. 26, 1862, 38 Dakota warriors were hanged in front of 4,000 spectators. The Dakota were then banished from Minnesota to reservations in the Dakota and Nebraska Territories. (The “38+2” refers to these 38 warriors as well as Shakopee and Medicine Bottle, two Dakota leaders who were executed at Fort Snelling, Minn., in 1865.)
In some cases, trials lasted less than five minutes. None of the accused were provided with legal representation, and much of the evidence was based on hearsay. In no other war between the U.S. and Indian nations did the United States apply criminal sanctions to punish those captured. “It was very unclear that there was authority to have this kind of trial,” says Carol Chomsky, a professor at the University of Minnesota Law School. “They treated those individuals as essentially criminals. We were treating Confederate soldiers as prisoners of war, but we did not treat the Dakota as prisoners of war.”
The idea for the ride came to Jim Miller in a dream in 2005. Jon Eagle explained to those gathered that Miller’s dream also became a way to reconcile his experience fighting in Vietnam. “Through that dream… he found healing,” Eagle said. “And as a warrior he found love, because that’s who our warriors really are.”
Murmurs rushed through the crowd as someone spotted a bald eagle flying above.
Curtis McKay of the Sioux Valley Dakota Nation read the names of all 40 men. “I want you to hear the Dakota language,” he said, “to know that we’re still here.” Wilfred Keeble, chair of the Crow Creek Sioux Tribe in South Dakota, spoke, too, saying, “We’re here for the dream, the message—healing, reconciliation, cultural diversity.”
Later, while everyone warmed up with a large community meal at the New Creation World Outreach Church, Miller sat with his wife and family. “We have to reconcile ourselves first,” he says. “And then we can reconcile with the community.”
Justin Perkins is a Rur­al Amer­i­ca In These Times edi­to­r­i­al intern. He’s from Nebraska.
Have thoughts or reactions to this or any other piece that you'd like to share? Send us a note with the Letter to the Editor form.
More articles by Justin Perkins
Rural America
A New Native-Led Strategy for Fighting Keystone XL
At a June corn-planting ceremony, the Ponca Tribe took ownership of land in the pipeline’s path.
Rural America
The 2018 Farm Bill’s Hidden Agenda to Push Millions off Food Stamps
Similar articles
Dispatch
India’s Green Party Maverick
The 'poor man's Ralph Nader' tries to turn a green movement into a mass movement.
Robert Hirschfield
Dispatch
Got Raw Milk?
Small farmers and consumer advocates say unpasteurized milk bans are about protecting big industry.
Marie Landau
Dispatch
No Change for Obama
LGBT activists launch a boycott of Barack Obama and the Democratic Party.
Gemma Baltazar
Subscribe to our free newsletter
Fearless journalism that speaks truth to power
Limited Time: