Why Corporate Agriculture is a “Recipe for Famine and Extinction”

Globalized, petro-chemical-fertilizer-dependent, monoculture-based, agribusiness insists, and has for decades, that only it can feed the world’s growing population. But because this industrial farming model isn’t producing ​“healthy food” so much as ​“edible commodities” and ​“the world” isn’t so much a ​“planet” as it is a big marketplace floating in space — one in which transnational corporations can influence the policy of nation states — this claim warrants suspicion.

Vandana Shiva — Indian physicist, researcher, author, anti-globalist and world-renowned advocate for economic, food and gender justice — has written more than 20 books. Her latest, Who Really Feeds the World? The Failures of Agribusiness and the Promise of Agroecology, offers a damning critique not only of industrial farming, but of the half-truths and outright lies employed to promote it around the world. It also presents us with an alternative.

In this 155page manifesto, Shiva makes the case that not only is the dominant industrial paradigm not needed to feed the world, it’s doing a tremendous job of destroying it. The planet’s soil, water, biodiversity and human health are being compromised and exploited for profit by a relatively small pack of corporations operating on a worldwide scale:

In other words, 20 transnational corporations are making enormous sums of money marketing, selling and distributing harmful solutions to the economic and environmental problems they are simultaneously creating.

“Monocultures of the mind”

Modern industrial agriculture is based on the propagation of patented, high-yield (HYV), genetically modified monocultures — a limited variety of crops, engineered to require and withstand an elaborate regimen of nitrogen fertilizers and poisons. Using insane accounting practices that ignore the resources (inputs) required to cultivate these plants, as well as their subsequent toll on aquifers, soil quality and pollinating insects etc., they are often touted as ​“efficient” even before they get shipped across the world to ​“feed” people.

These few agricultural commodities (three plant species — rice, wheat and maize — account for 50 percent of our caloric intake) are being grown to the exclusion of most everything else, shrinking regional biodiversity while fostering diets that create disease and malnutrition. Meanwhile, their large-scale production requires a mechanized, militarized mindset.

Industrial agriculture is rooted in a patriarchal scientific paradigm that privileges violence, fragmentation, and mechanistic thought. Rooted in ideologies of war, this paradigm creates Monocultures of the Mind, and monocultures on our land, denying the knowledge of agroecology, and of diversity, which is women’s knowledge.

(The role of women in agriculture is central to Who Feeds the World? The second to last chapter, ​“Women Feed the World, Not Corporations,” explores how women ​“are the primary growers of food, nutrition, and nourishment in societies across the world” and describes the essential role they must play in establishing alternative food systems.)

The industrial model Shiva describes (and challenges) is indeed an assault on nature — a war on land, air and water that, despite corporate claims to the contrary, ultimately requires far more inputs (what Shiva calls ​“energy slaves” or ​“the fossil-fuel equivalent of one person”) than is justified by its output. Yet being unsustainable in the extreme, and leaving ecological crises and economic casualties up and down the food chain has done little to dampen public acceptance of the dominant corporate feed-the-world narrative.

​“The reality,” Shiva writes, ​“is that only 30 percent of the food that people eat comes from large-scale industrial farms. The other 70 percent comes from small-scale farmers working on small plots of land.”

Small farmers still provide most of the world with the kind of food humans should eat but, as Shiva makes clear, ​“Small-scale farmers are in crisis. They are being wiped out by the rules of corporate globalization, designed to maximize corporate profits at the cost of small-scale farmers.” These costs include not only the destruction of rural livelihoods and the loss of farms to banks, but human lives:

Since 1995, 284,000 farmers in India have killed themselves due to rising input prices and volatile output prices. As governmental support for farmers declined through liberalization, and as breeders could no longer access credit from public-sector or cooperative banks, they were driven into the hands of potentially more exploitative, usurious relationships.

Dealings with chemical and seed patent holders has led to mounting debt for farmers in India and around the world. Shiva writes, ​“Pseudosafety laws, fascist seed laws, and neoliberal policies and markets are preventing alternatives to a model that is deep in crisis.”

GMOs as the Green Revolution’s next phase

As Edmund Russell explored in the seminal 2001 book, War and Nature: Fighting Humans and Insects with Chemicals from World War I to Silent Spring (reviewed here by Rural America In These Times), the industrial application of pesticides, herbicides and nitrogen fertilizers in the field has its origins in violent global conflict. In the wake of World War II, weapons manufacturers sought a peacetime market for new lethal technologies and discovered that treating high-yield monoculture crops with nitrogen fertilizer, neurotoxic pesticides, herbicides and insecticides kept their business going.

“But pesticides do not control pests; rather, they create them,” Shiva writes, ​“Pests increase with the application of pesticides because beneficial species are killed and pests become resistant to chemicals.” A mere fraction of the pesticides sprayed, furthermore, act directly on their target. Much of the rest, she writes, make their way into our ​“rivers, groundwater, breast milk, soil, food and air.”

Highly critical of the Green Revolution that reached the Indian subcontinent in the 1960s, and the war on nature that came with it, Shiva views the global current push for GMOs as the next phase of this unsustainable paradigm:

After the failure of Bt [Bacillus thuringiensis] and HT [herbicide tolerant] crops to increase yields, decrease chemical use, or control weeds and pests, biofortification through genetic engineering has become the next big push of global agribusiness.

She credits genetic engineering and GMOs with creating ​“an entirely new type of pollution on our planet,” one simultaneously responsible for ​“negatively impacting plants, animals, human health, and the livelihoods of farmers and local communities.” Marketed as an alternative to chemical pesticides, ​“the poison has been introduced as a toxin-producing gene within the plant, so in effect, the GMO becomes a pesticide producing plant.” Meanwhile, she writes, as new pests emerge, old pests grow resilient and ​“the result is an increased use of chemical pesticides,” These are sold by the same biotech corporations that created the GMOs in the first place.

Meanwhile, the corporations profiting from this system work to subvert inconvenient data and research, Shiva writes, by trying ​“to silence, hound, and victimize scientists whose work shows that pesticides and GMOs cause harm to health.”

“Food can and must be grown everywhere”

What makes Who Feeds the World? unique (plenty of people have been pointing out the severity of this eco-economic crisis we find ourselves in) is that the author draws on her 30 years of experience implementing and promoting agroecology, an environmentally conscious method of food production that ​“takes into account the interconnectedness of life and the complex processes that take place in nature.” — (See: Navdanya)

Shiva writes, ​“Monocultures were born of the idea that plants compete with each other, when the reality is that plants cooperate with each other.” That, in essence, is the foundation of agroecology. It is based on centuries of human knowledge of how plants naturally interact with other plants, insects, soil and climate to maximize (not eliminate) biodiversity and thus provide an abundance of nourishing food without the use of chemicals. Precisely because agroecology is based on what combinations of plants, pests and pollinators thrive regionally, it’s manifestly biodiverse and local.

The fundamental tenets of the agroecological paradigm, Shiva writes, are as follows:

Replacing the ​“Law of Exploitation,” on which globalized agribusiness is founded, with agroecology’s ​“Law of Return” will require what Shiva describes as ​“a transition from the obsession with ​‘big’ to a nurturing of the ​‘small’ — from the global to the local — pseudoproductivity to real productivity — fake food to real food and moving from the false idea of competition to cooperation.”

The value of food cannot be determined by a global casino … Large-scale, long-distance food chains in an industrialized, global food system must become a short-scale, short distance food web based on the ecological enlightenment that no place is too small to grow food…Everyone can also be a grower of food, which means that food can and must be grown everywhere.

(This last point, by the way, includes the idea that every city should have it’s own ​“foodshed”, producing enough food locally to feed every resident.)

Though the book lays bare the many ways globalized food production is failing both people and planet, Shiva explains that it does not need to be this way. By switching to more diverse, localized, food systems that work with nature, not against it, we can feed ourselves and nurture the environment at the same time. What the book does not explain is how (short of everyone implementing an environmentally conscious approach to food production everywhere now) to counter the forward march of globalized corporate agribusiness. In the United States and elsewhere, more and more people are concerned about where their food comes from. They want to know what’s in it, and that it’s good for them. That is without doubt a good start. We might also remind ourselves that when it comes to eating, we have a much longer history of being good at it than bad. Indeed, long before humans invented patents, debt and pesticides — we grew food. 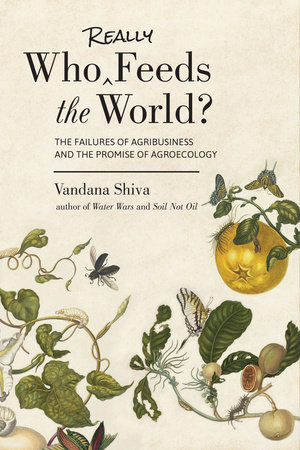 Get your copy
John Collins is the editor of Rural America In These Times. He lives between Minneapolis and La Pointe, Wisconsin, a village on Madeline Island in Lake Superior.
Have thoughts or reactions to this or any other piece that you'd like to share? Send us a note with the Letter to the Editor form.
More articles by John Collins
Rural America
The Community Rights Movement to the New Hampshire House: Let the People Decide What’s Best
Rural America
Democrats Have Gone off the Rails in Rural America. Can a New Report Get Them Back on Track?
Rural America
How Much Nitrate Is in Rural America’s Water?
Similar articles
Rural America
The 40-Year Robbing of Rural America
Since the 1980s, says Professor Marc Edelman, financial capital has developed imaginative new ways to seize assets from small towns and rural areas.
Olivia Weeks
ViewpointRural America
Mourn the Extinct, Fight like Hell for the Living — a Wildlife Reporter’s Plea
The 23 species declared extinct by the U.S. Fish and Wildlife Service show us how much we have to lose. They should also motivate us to fight to stop further loss.
John R. Platt
Rural America
A Pesticide-Laced Flea Collar Has Been Linked to Almost 1,700 Pet Deaths. Why Hasn’t the EPA Issued a Warning?
Some experts say the collar reveals a fundamental problem with EPA’s pesticide regulation process.
Johnathan Hettinger
Join our newsletter
Fearless journalism, emailed straight to you.
Subscribe and Save 59%