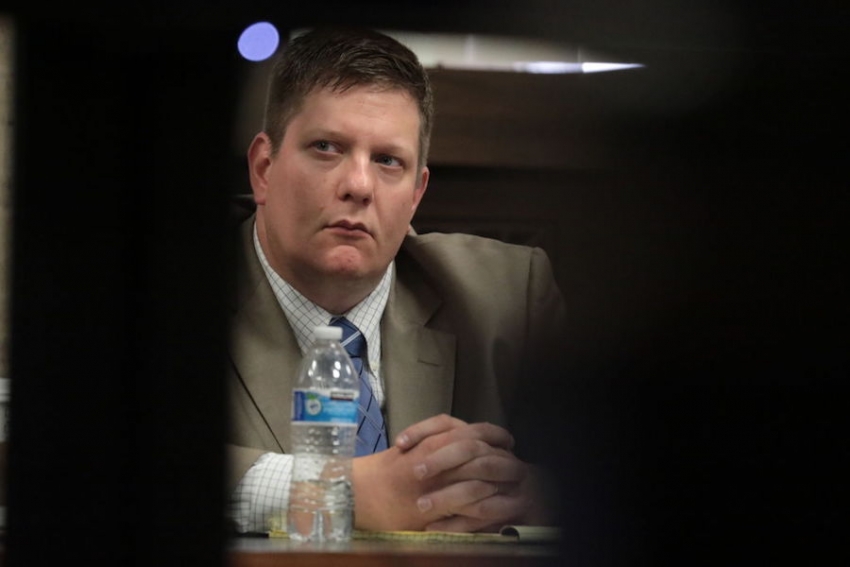 Most unionized workers expect labor unions to secure higher pay and better work conditions, protect their common interests, and defend them from unjust discipline or dismissal.

But when officers make a mistake at work or defy the rules, that slip might amount to a government-sanctioned extrajudicial killing. And when they get away with abuse and murder, often with help from their unions, it reinforces a deep-seated culture of authoritarianism and impunity.

Police unions in my hometown Chicago have a history of defending violent police like former Chicago Police Department (CPD) commander Jon Burge, who tortured or approved the torture of more than 100 people—most of them Black—from 1972 to 1991, and officer Jason Van Dyke, who in 2014 fatally shot Laquan Mcdonald 16 times as the 17-year-old walked away. From their beginnings, police unions have also dampened police reform efforts, using both collective bargaining agreements and political clout. Protections enshrined in their contracts are often reinforced by state laws that these unions have lobbied for or essentially written themselves, such Illinois’ “police bill of rights.”

I began researching how police contracts influence accountability in 2015, after the police killing of Laquan McDonald, when the Black Lives Matter movement was first taking shape. Other journalists, activists and researchers had already identified police unions as a significant roadblock to change.

In 2017, I teamed up with In These Times, Injustice Watch, the Invisible Institute and City Bureau to annotate the Chicago Fraternal Order of Police contract and explain how the provisions stifle accountability. Here’s a look at some of the more problematic ones:

Those are just some of the troubling provisions, and the contract is only one piece of the police union puzzle.

The Fraternal Order of Police, the nation’s biggest police union, has for years reigned as one of the most powerful and volatile political forces in Illinois. The Chicago chapter has a legacy of excluding and alienating Black officers, perpetuating false narratives about police killings of Black people, and protecting abusive cops from oversight and accountability.

FOP’s lobbying has ensured that many of the problematic contract provisions are also enshrined in state law and that major reform efforts die on the vine. When Illinois lawmakers tried passing a law to establish independent oversight of police sexual abuse cases, for example, the Chicago and Illinois chapters of the Fraternal Order of Police deployed power lobbyists in efforts to curtail the law so it passed without including Chicago cops.

Other unions, even large and influential ones, can’t boast the same treatment. Consider the Chicago Teachers Union: For some 25 years, the state has barred its largest teachers union from negotiating over non-economic issues, such as class sizes and staffing levels,  without permission from their boss, the mayor.

Teachers faced a concerted attack from those in power. The 1995 Chicago School Reform Amendatory Act, which established mayoral control of Chicago Public Schools and put in place the ban on non-economic bargaining, was backed by then-Mayor Richard M. Daley and the business community and passed by a Republican-led legislature. In 2011, Daley's successor, former Mayor Rahm Emanuel, backed an education reform bill that barred teachers from negotiating over the length of the school day or school year and was intended to lessen the chances of a teacher strike. Emanuel, who picked a fight with the CTU as soon as he took office that culminated in a historic 2012 strike, continued to oversee the proliferation of publicly funded, privately-run charter schools, layoffs disproportionately affecting veteran Black educators, and mass school closings (of mostly Black schools) in 2013 as Daley had before him, much to the teacher union’s chagrin.

Yet in 2014, after those clashes with teachers, elected officials trumpeted a more harmonious relationship with the police union. When the city approved the last FOP contract, Emanuel applauded FOP leadership and City Council (including aldermen criticizing the union today) gave then-union president Dean Angelo Sr. a standing ovation in council chambers.

If the CTU’s experience shows anything, it’s that collective bargaining rights are not set in stone. Where there is political will, there is a way. Elected officials could take a page out of Daley and Emanuel’s teachers union playbook and lean on state lawmakers to amend state labor laws and take certain issues off the bargaining table for police. State lawmakers would also have to repeal police bill of rights statutes that enshrine troublesome contract provisions, and then rewrite or abolish the contracts themselves.

As Benjamin Sachs notes at OnLabor, a bevy of research shows the racist harm that police unions have inflicted. A 2018 study found that granting Florida sheriffs' offices collective bargaining rights increased violent incidents. Another 2018 study, of the nation's 100 largest cities, found that protections against investigation and oversight in police contracts correlated with slayings of unarmed civilians.

Still, despite that evidence of harm, some on the Left and in the labor movement remain hesitant to rebuke and expel police unions. I’ve spoken to labor experts who worry that disavowing police unions is a slippery slope to enabling political attacks on other public sector workers. Some fear that if lawmakers are encouraged to undermine police union contracts, other public-sector union contracts will follow.

Most public workers, however, don’t clock in with a gun on their hip, a badge on their chest, broad latitude to use deadly force, and a union willing to back their actions at all costs.

So, where does the labor movement stand?

Richard Trumka, head of AFL-CIO, the nation’s biggest federation of unions, has rejected calls for police unions to be expelled from the federation (the FOP is not a member, but the International Union of Police Associations is). So far, just one AFL-CIO affiliate, the Labor Federation of King County, Wash., has broken ranks and voted for expulsion.

Trumka and other labor leaders have condemned systemic racism and police violence and even declared that Black lives matter. Despite those gestures, they have hesitated to criticize the robust collective bargaining agreements protestors characterize as tools of state-sanctioned impunity.

Whatever the case, this much is clear:

Any push to reform, defund or abolish the police means wrestling with police unions, whose leaders are digging in their heels even as their counterparts in labor demand an end to police violence.

This analysis was published in collaboration with Injustice Watch

Adeshina Emmanuel is an editor at Injustice Watch, a nonprofit journalistic research organization dedicated to exposing institutional failures that obstruct justice and equality. He is a former reporter for DNAinfo Chicago, the Chicago Sun-Times, the Chicago Reporter and Chalkbeat.