Despite Record Yields, Farm Sector Profits are Forecast to Decline for the Third Straight Year

In an op-ed in the Des Moines Register about how the continuing corporate consolidation of agriculture will negatively affect farmers, Zachary Herrnstadt writes:

In most cases if someone does their job well, they are rewarded with a raise. All too often in farming, the opposite is true. Farmers are told that the key to success and increased profitability is to invest in new technologies and additional inputs (seeds, pesticides, etc.) to grow more food more efficiently. However, the cost of adopting these technologies and inputs has far outpaced farm commodity prices. As a result, many small and mid-sized farms continue to encounter situations like this year: record crop production accompanied by commodity prices that will not even cover the cost of production.

The latest decline in crop prices is widespread and being felt by farmers in most agricultural sectors. In August, however, the USDA’s National Agricultural Statistics Service (NASS) forecast record-high domestic corn and soybean production:

Aided by excellent field conditions, corn growers are expected to increase their production by 11 percent from the 2015 harvest. Average corn yield is forecast at 175.1 bushels per acre, setting a new record-high. NASS forecasts record-high yields in 10 of the largest corn-producing states. … U.S. soybean growers also took advantage of the favorable weather conditions and are forecast to increase their production by 3 percent from 2015. Soybean yields are expected to average 48.9 bushels per acre, reaching another record-high mark. Just as with corn, the acres planted to soybeans remain unchanged from the June estimate. Record soybean yields are expected in Illinois, Iowa, Missouri, Nebraska, and Wisconsin. Growers are forecast to harvest 83.0 million acres of soybeans this year.

As supply outweighs demand, the prices these farmers are counting on to cover their expenses (and eventually realize a profit) drop. Since mid-June, for example, corn future prices for December have declined by more than $1 a bushel while high-yields have pushed wheat prices to 10-year lows. Falling crop prices are generally seen as a positive for consumers, but this volatility has consequences that ripple up and down the food chain—from grocery store hiring, to orders for manufacturing equipment to increased government safety-net spending (taxes).

As the Milwaukee Journal Sentinel reports:

Since June, the price that farmers can expect for corn delivered in December has fallen more than 25 percent to about $3.25 per bushel — hovering near the break-even point for some growers. … The downturn will harm the rural economy, too, as each dollar of net farm income results in an additional 60 cents of economic activity, according to University of Wisconsin research.

As we enter the 2016 harvest season, falling commodity prices stand to leave many American farmers struggling to break even. In other words, despite an increase in direct government farm program payments, a decrease in annual production expenses and record yields—farming sector profitability is set to decline for the third straight year. If this happens, the USDA’s Economic Research Service (ERS) reports, 2016 net farm income would be the lowest since 2009. 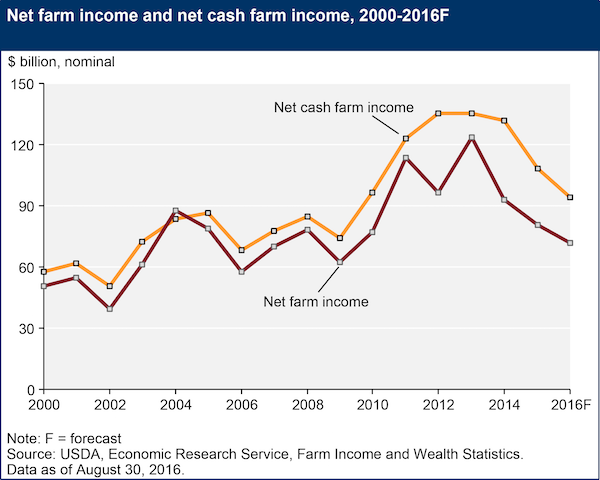 A system where success can yield failure

The more leveraged a farmer is (the more debt a farm carries) the less able she or he is to weather the current economic climate. On an emotional level, the realization that achieving the fundamental objective of modern farming (maximizing the amount of food grown on their patch of land) can work against them also weighs heavily on farmers.

On the first Tuesday of each month, Purdue University’s Center for Commercial Agriculture in collaboration with the CME Group (the world’s largest livestock futures exchange) releases the Ag Economy Barometer—“a nationwide measure of the health of the U.S. agricultural economy.” Based on a survey of 400 farmers, the barometer is designed ​“to create a new and important tool for producers, economists, traders, finance industry professionals and journalists who are interested in understanding the agriculture industry and the broader global economy.”

Producer sentiment took a U‑turn in August, declining sharply after improving in three out of the four previous months. The spring rally in crop prices fueled some long-run optimism on the part of producers, which was reflected in stronger Ag Economy Barometer readings for several months. But the sharp decline in crop prices over the last two months, with many producers facing cash corn prices below $3 per bushel this fall, eroded remaining optimism among crop producers, pushing the barometer down sharply in August.

“Eroded optimism among crop producers” is good diplomatic language but lacking in specifics. In the following comment, posted in response to USDA Sees 2016 Farm Income Crashing As Farmer Leverage Spikes to 34 Year Highs (Zerohedge), one farmer expresses his ​“eroded” optimism this way: 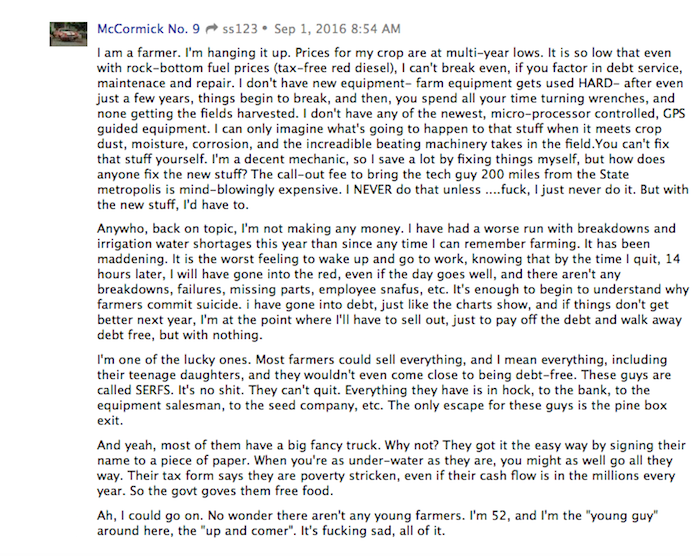 In the fun house of ag economics, efficiency has little to do with farmer profits (and nothing to do with sustainability). And while farmers like McCormick No. 9 despair, the handful of seed and chemical giants who already control corporate agribusiness are consolidating. Bloomberg reports that pending mergers among the world’s largest chemical and seed corporations — Dow Chemical Co. and DuPont Co., China National Chemical Corp. and Syngenta AG and Monsanto and Bayer AG — would leave ​“about 75 percent of the global crop-chemicals industry…in the hands of three companies.” [Link added by Rural America In These TImes.] 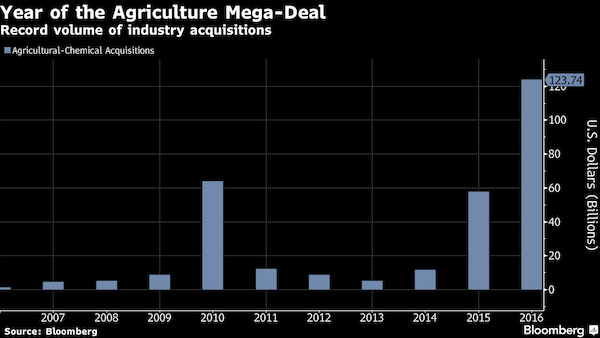 Herrnstadt, in the conclusion to his op-ed, Ag Industry Consolidation Means Less Control For Farmers, offers the following solution:

To level the playing field, robust competition within agricultural markets is vital. We must advocate for increased and improved enforcement of federal antitrust laws pertaining to agribusiness concentration. Federal and state regulators should revise and reform existing legislation to ensure fair market pricing and avoid non-competitive monopolistic and oligopolistic market control. Crop insurance must undergo major reforms and become a true risk-management program that no longer encourages the overproduction of a few commodity crops.

Now is the time to work for changes that favor sustainable production rather than overproduction. Now is the time to advocate for a system that allows farmers to earn a decent price for the food they grow rather than one that prioritizes enormous profits for a few large companies. We must all work together to take these important steps — because farmers deserve better.

As the presidential election nears, Rural America In These Times will cover where Donald Trump and Hillary Clinton stand on food and farming issues. Trump, for example, recently hired a high-profile Republican Ag policy team to help him sort out his rural policy positions. Meanwhile, Clinton is squarely aligned with USDA Secretary of Agriculture, Tom Vilsack. For a cursory comparison, check out this post from Modern Farmer.

Check out the options
John Collins is the editor of Rural America In These Times. He lives between Minneapolis and La Pointe, Wisconsin, a village on Madeline Island in Lake Superior.
Have thoughts or reactions to this or any other piece that you'd like to share? Send us a note with the Letter to the Editor form.
More articles by John Collins
Rural America
The Community Rights Movement to the New Hampshire House: Let the People Decide What’s Best
Rural America
Democrats Have Gone off the Rails in Rural America. Can a New Report Get Them Back on Track?
Rural America
How Much Nitrate Is in Rural America’s Water?
Similar articles
FeatureRural AmericaClimate
After Ida, This Louisiana Tribe Is Organizing Its Own Recovery
Armed with agricultural knowledge and mutual aid networks, the Houma people aren't waiting on the government to rescue them.
Joseph Bullington
Rural America
How a Rural Colorado Community Self-Organized a Successful Vaccination Effort
Immigrant community groups, forced to organize by the constant threat of ICE, have played a central role as vaccine information networks.
Dave Marston
ViewpointRural America
No Parks for the Poor
In the face of budget cuts, some land management agencies are ramping up user fees — and betraying the egalitarian promise of public lands.
Joseph Bullington
Join our newsletter
Fearless journalism, emailed straight to you.
Subscribe and Save 66%