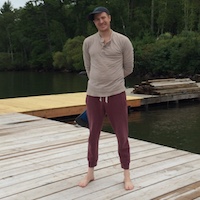 La Pointe is a former French outpost that was established in 1693 by French fur traders. Madeline Island is the spiritual home of the Ojibwe. A part of the island is governed by the Bad River Band of the Lake Superior Tribe of Chippewa Indians, the rest is under the jurisdiction of Ashland County.

John is the great-great grandson of James B. Weaver (1833-1912). A member of Congress from Iowa, Weaver ran for president in 1892 as the candidate for the People’s Party (aka “The Populists”), a party that he helped found. (Weaver carried Kansas, Colorado, Nevada, Idaho and North Dakota, for a total of 22 electoral college votes, along with many majority black counties in the Deep South, who citizens supported the Populists because of their opposition to the doctrine of white supremacy championed by the Democratic Party) Weaver was also the editor of the Iowa-based Farmer’s Tribune.
In his 1892 book, A Call to Action: An Interpretation of the Great Uprising. Its Sources and Causes, James B. Weaver warned: “Corporate feudality has taken the place of chattel slavery and vaunts its power in every state.”

John hopes to amplify the voices of rural America to make them heard. He says, “As James Weaver wrote, ‘As a rule, men and women in the private walks of life—the sufferers—are first to apprehend impending danger, and it is their sleepless energies which finally arouse the drowsy conscience of nations.’ ” Throughout his life Weaver was a steadfast champion of America’s farmers.

“Today,” says John, “the stories of people who live in our country’s small communities, native and non-native, are not being told. Both the independent media and the commercial media—social and televised—ignore an entire way of life.”

John, 33, graduated from the University of Utah in 2011 with a B.A. in English. From 2011 through 2014 he worked as a carpenter for Northwoods Construction on Madeline Island. From 2002 to 2006 he was a guitarist for the LA-based indie rock band Controlling the Famous, which released the album Automatic City in 2006 on The Militia Group label.